Will their time alone aboard The Haunted Star reunite Sam (Kelly Monaco) and Jason (Steve Burton)?

This article contains spoilers so if you haven’t seen the Friday, December 29, 2017 episode of General Hospital, please do not continue reading.

What would you do if you learned the man you married wasn’t the husband who you thought dead for five years, but returned with a new face and ended up being the twin brother of your husband and was given a medical procedure that transferred your husband/his twin’s memories to him? Sounds like something out of a soap opera.  Oh wait…it is.  Poor Sam, she believed that Jason had come back to her.  But it wasn’t Jason, but Andrew Cain, Jason’s twin brother. There’s no doubt that Sam is torn. After all, she’ll always love Jason.  But she’s also fallen in love with Drew and has vowed to honor the promises they made to each other.  She and Drew have decided to re-marry and since he’s not Jason Morgan, their current marriage isn’t legal. Drew proposes, then Sam proposes. Samantha McCall accepts so she and Drew are new engaged…the former Sam Morgan is going to be Mrs. Andrew Cain.

As much as Jason loves Sam and wants his old life back, he realizes what she is going through and doesn’t want to pressure her. Jason has backed off. But convincing Carly (Laura Wright) to do the same is like convincing a fish that it shouldn’t swim.  Carly reasons that she’s doing Sam, Drew and Jason a favor by helping Sam and Jason find their way back together. Sam will always love Jason, Carly knows, and Drew will only be hurt in the long run if he believes he’s the man Sam wants to spend the rest of her life with. She thinks that if Sam and Jason can just have some alone time together, they’ll be able to work through their feelings and get back together. When the sneaky Carly learns that Sam and Drew have rented out The Haunted Star for a private New Year’s Eve celebration for just the two of them, so she makes Jason believe that Sonny texted saying he needed Jason to meet him at The Haunted Star because he had information on Faison’s whereabouts. Sam is shocked when Jason arrives aboard the boat.  It doesn’t take them long to realize they were set up and not difficult to determine the culprit is Carly. And with The Haunted Star on autopilot, Sam and Jason soon find themselves adrift out to sea. And what better way to pass the time then with a game of “drunk dominos” with the loser taking shots. Although Sam is a great player, it soon becomes obvious to her that Jason is losing on purpose in order not to take arrange of a woman by getting her drunk. “Especially a woman that’s not yours,” Sam says awkwardly. But as it’s almost midnight, Sam and Jason go out on deck to look at the fireworks. As it strikes 12:00AM, memories of the past come flooding back and they share a New Year’s kiss. Is this a whole new beginning for Sam and Jason? 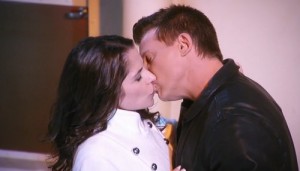 Photos taken from the internet; credit given to original source

I admit as a longtime fan and viewer of General Hospital, I am hoping for a Sam/Jason reunion. That being said, Sam and Drew have get chemistry as well. I applaud all three actors. Kelly, Steve and Billy have done an amazing job giving emotional performances.  I feel that what’s important for fans to remember is that these actors are playing out a story, so regardless of the outcome, respect for the actors and other fans needs to be shown.

Update: After being trapped with Jason in Jim Harvey’s trailer during the recent Port Charles earthquake, Sam admitted that she loves him and always will. But she loves Drew too, what will Sam do?