Donna Lynne Champlin continues to delight viewers in her role as Paula Proctor in The CW’s Crazy-Ex Girlfriend, which airs Fridays.

The best thing about Paula is she is every woman: wife, mother, friend.  Paula is someone you’d want in your life. Regardless of the situation, Paula helps brings a solution to it with a take charge, take no prisoners mentality that makes you feel “everything will be okay,” even when you may not totally believe it. And Donna Lynne Champlin plays her with a sincerity that reaches through the television screen.  She is a gem that helps make Crazy Ex-Girlfriend a joy to watch. 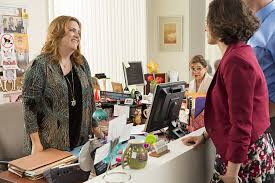 I had the pleasure of interviewing Donna Lynne in March 2016 and it remains one of my favorites. Talking with her was like speaking with a friend as she is just as down to Earth as Paula. She loves being a part of Crazy-Ex Girlfriend and appreciates everyone involved with this project.  This Broadway trained actress uses her skill to entertain and takes pride in her work. 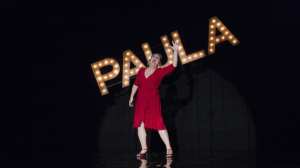 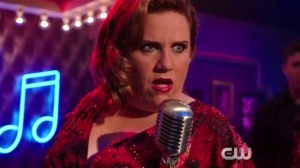 Recently, I discovered that Donna Lynne Champlin has a cameo as a Leisureland Administrator in the film Downsizing.  The description of Downsizing: “When scientists discover how to shrink humans to five inches tall as a solution to overpopulation, Paul (Matt Damon) and his wife Audrey (Kristen Wiig) decide to abandon their stressed lives in order to get small and move to a new downsized community — a choice that triggers life-changing adventures.” (Rotten Tomatoes)

I’m intrigued by the concept of Downsizing as I’ve always had an affinity of the idea of miniature people. Back in the 1970s when I was a child,  I read a series of books by John Peterson called “The Littles.” I also read Mary Norton’s “The Borrowers.” So the premise of this movie is interesting to me and the fact that Donna Lynne Champlin has an appearance in it is an extra treat. I’d encourage fans of Crazy Ex-Girlfriend to go see this movie

Congratulates Donna Lynne…looking forward to seeing you on the big screen and continuing watching you on Crazy Ex-Girlfriend.

Photos taken from the internet; all credit given to the original sources