Like the title of the CBS drama, the women of Los Angeles are bold and beautiful. Attractive and intelligent and not afraid to take control of their lives.

Steffy Forrester (Jacqueline MacInnes Wood) is one of these women.  She is a successful career woman and new mother juggling her two roles. But she also had an affliction that plagued the women of The Bold and the Beautiful since the daytime serial’s inception: A complicated love life. And like her mother before her, Steffy found herself loving a man who loved two women.

Years ago, Liam Spencer (Scott Clifton) came to Los Angeles and fell in love with Hope Logan. The couple dated and eventually married. But Steffy also loved Liam and teamed up with his father Bill Spencer (Don Diamont) to break up Hope and Liam. Hope left town and Steffy and Liam ended up marrying.

Fast forward: Bill Spencer was no longer the champion for Liam and Steffy’s relationship. He’d fallen in love with her and was determined to have Steffy Forrester for himself. Many manipulations later, Steffy ended up sleeping with Bill and destroying her marriage to Liam. By this time, Steffy discovered she’s pregnant (by Liam) and later gave birth to a baby daughter that she named Kelly to honor Liam’s mother. And Hope returned to Los Angeles. After everything, Liam and Steffy found their way back to each other. But in an impromptu moment, Liam kissed Hope after the Hope for the Future fashion show and Steffy walked in and caught them!  Hurt, Steffy turned to Bill. Realizing she acted emotionally, Steffy considered her priorities were herself and her daughter Kelly and decided to make this her focus. 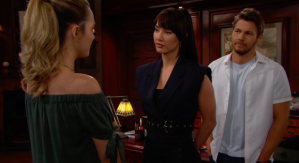 Jacqueline MacInnes Wood is doing an excellent job in her portrayal. I love the new Steffy and her take charge attitude with refusing to be the “Taylor” in between Liam and Hope. Steffy grew up and saw her mother continue to wait on the sidelines as Ridge decided who he wanted to be with, Taylor or Brooke. Steffy made the choice for Liam: She chose herself and Kelly and said “I don’t need a relationship to make me whole and secure, I can do that myself.” Brava Steffy for putting your daughter and yourself first…you’re helping to raise the next generation of bold and beautiful women!

Photo Courtesy of CBS and The Bold and The Beautiful