Below is an open letter from ClexaCon 2019 vendors to ClexaCon Showrunners. The material provided was sent as a press release to The Nerdy Girl Express and is being shared here to bring light to specific issues that arose during ClexaCon 2019 in connection to vendors.

We are writing to express our sincerest disappointment with your mismanagement of ClexaCon 2019. The majority of vendors here are seasoned exhibitors who know the risks of conventions, but we also know that our success is largely dependent upon convention leadership.

Below, we’ve identified key failings, in terms of vendors and vendor support, and a list of changes we encourage you to consider and take action on.

First, we would like to address your communication – its inconsistency and, sometimes, complete lack thereof.

Throughout the application and acceptance process, different vendors were given different table sizes. However, all vendors (vendor meaning an in-line vendor, not a wall-based exhibitor) had uniform tables: 6’ x 2’ as opposed to a sometimes-offered 8’ x 3’.

Communication problems didn’t stop here. On more than one occasion, volunteers attempted to clear vendors from the vendor hall before our allotted time. At approximately 7:06pm Friday evening, a group of vendors was told by not one but three volunteers to leave the vendor hall because it was closed. According to ClexaCon emails, vendors have until 7:30pm to close up shop for the day. 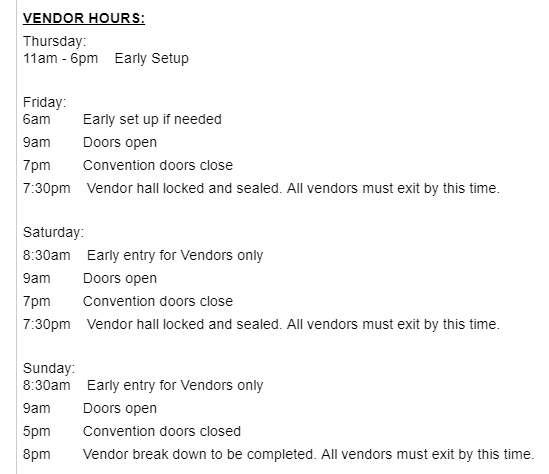 It should also be noted that for a queer event, there was a lot of gendered language being thrown around. One volunteer referred to this group of vendors as “ladies,” though it included two transmasc afab creators – one wearing a prominent pronoun pin. 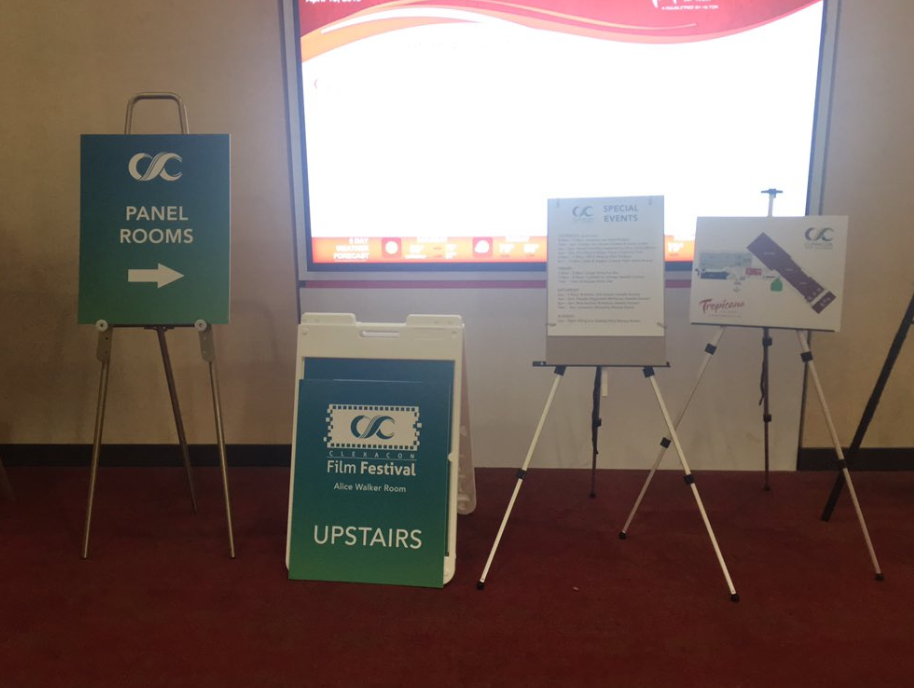 This photo was taken from the upstairs lobby. We wish to point out the complete lack of mention of the vendor hall. In fact, there were zero signs pointing to, directing toward, or even indicating the existence of a vendor hall. 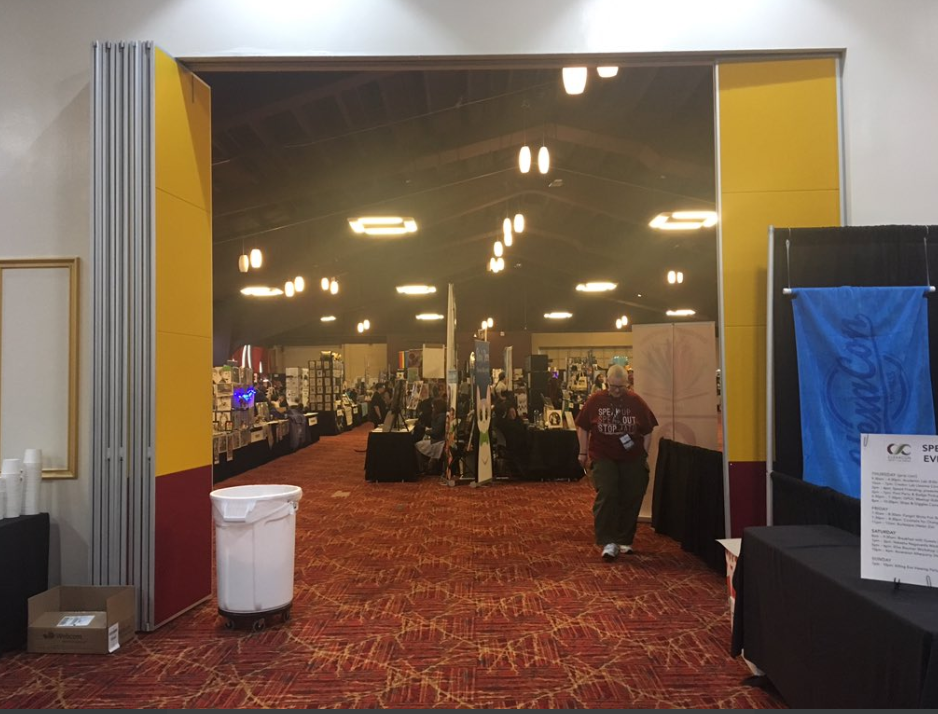 This photo looks into the vendor hall from the cafe and official merchandise table. There is, again, a complete lack of signage indicating that this is a vendor hall. 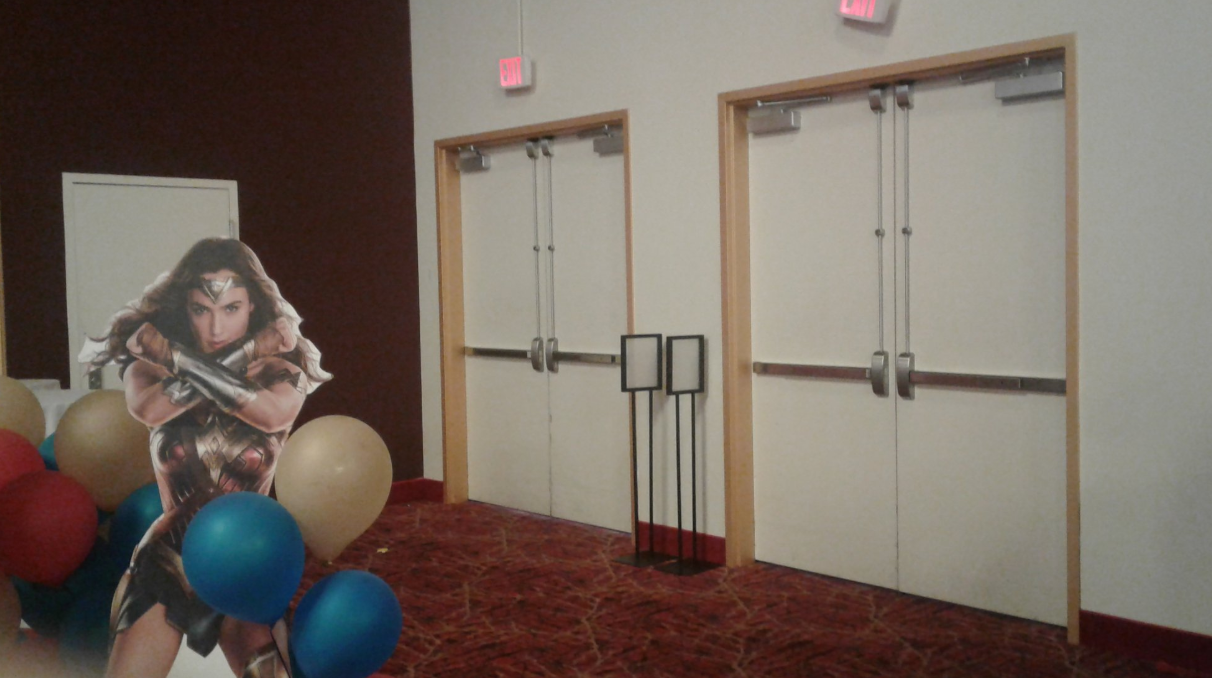 These are the doors to the vendor area from the main hall. These doors are a prominent feature, easily seen while walking to and from the restrooms. They remained closed the entire weekend. On Sunday, a video circulated showing that these doors were actually locked from the outside. So potential customers couldn’t use these doors even if they wanted to. In fact, staff actively directed attendees away from these doors, although they were the most direct way to access the vendor hall.

Second, we would like to address organization and general management of the convention.

It was revealed near 5pm Sunday evening that the hotel had placed restrictions on hall times. It wasn’t until Sunday – after two days of being harassed by ClexaCon volunteers – that vendors learned the hotel wanted everyone out of the rented spaces by 7:15pm (as opposed to the promised 7:30pm). No emails were sent out. No announcements were made. No attempt to communicate this information was had at all. 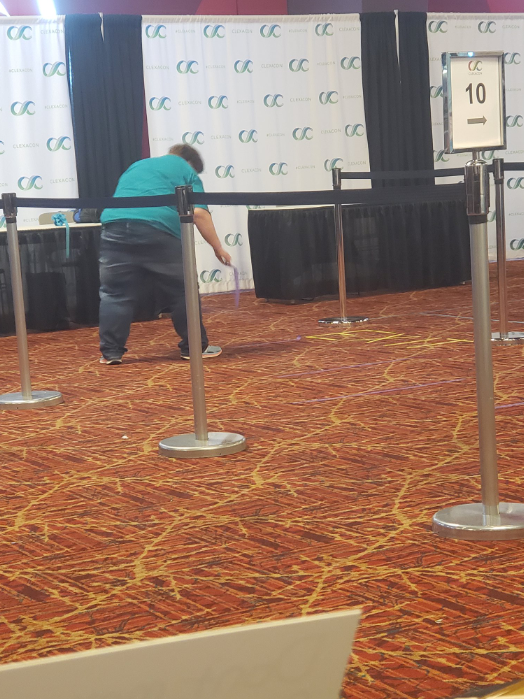 This picture was taken at 4pm Sunday afternoon. This is a ClexaCon volunteer removing tape from the floor which had been used to create autograph lines. This is within the vendor hall, which was supposed to be open until 5pm. This early breakdown and clean up of the convention sent the clear message that the hall was closing – while an hour of business and potential sales were yet to be had. There’s no question in our minds that this hurt our business and took sales from us, as the convention then appeared to be over. 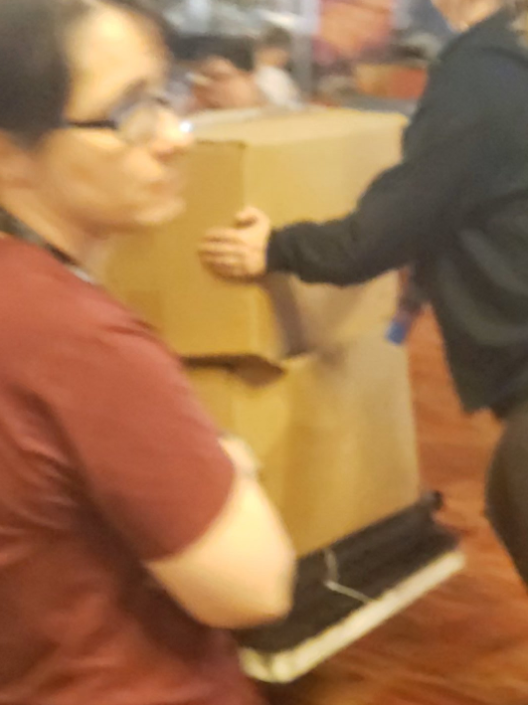 This photograph was captured at 4:04pm. According to our contracts, vendors were to begin breaking down at 5:01pm – after the close of the vendor hall. Yet, nearly an hour prior to this time, vendors were allowed to move out large boxes via trolley. This, again, sends the message that the hall is closed and business has come to a close – further hurting potential sales.

In addition to this obvious mismanagement, cleanliness and safety of vendors was hardly taken into consideration during the convention. Behind one table, a glass had shattered – falling into the space of the vendor behind them. This event was relayed to volunteers. The glass was never cleaned up. Vendors in the area did the best they could with the limited resources we had, but this area remained a danger for more than half the weekend. 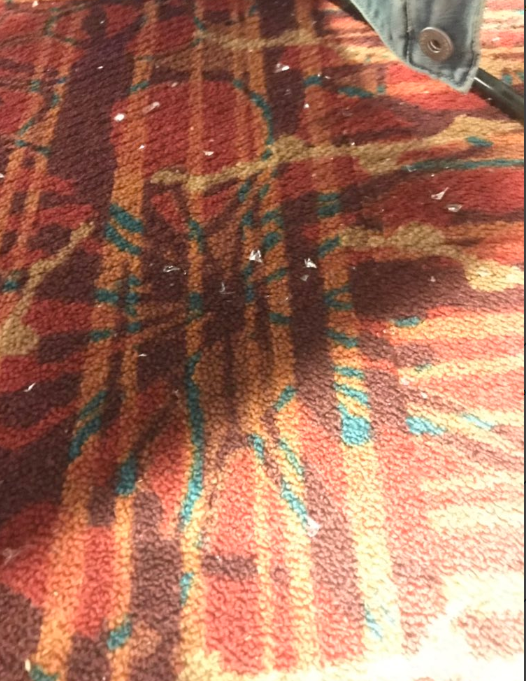 Third, we need to comment on the complete lack of promotion for the vendor hall.

@jijidraws on Twitter covered this more than adequately, so I will defer here with her permission. 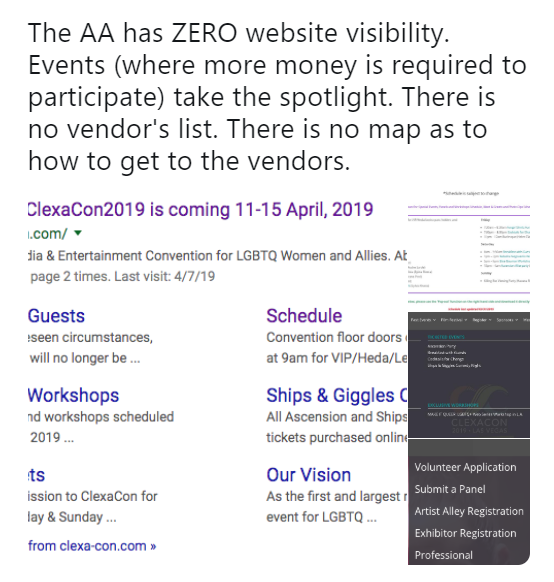 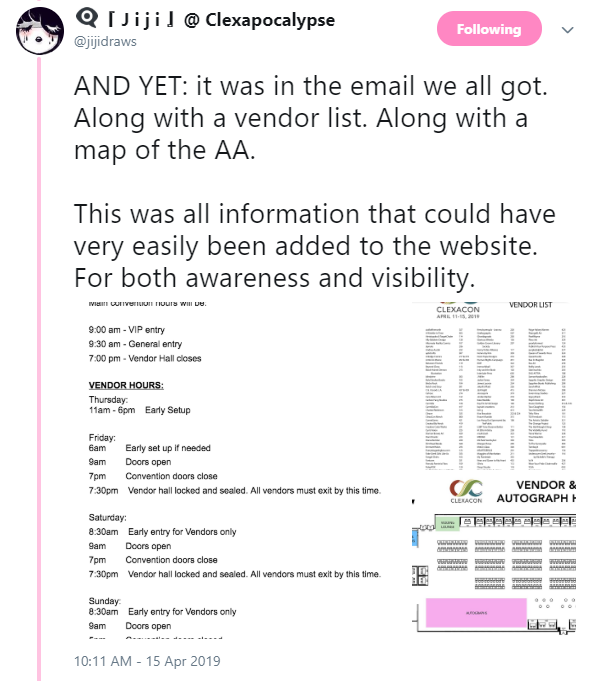 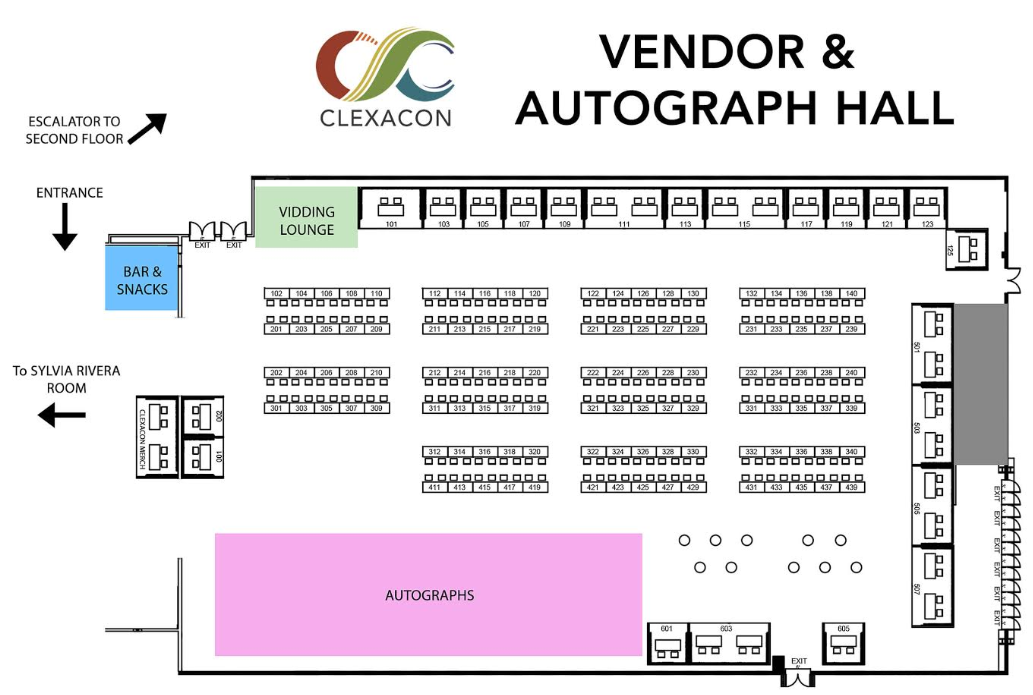 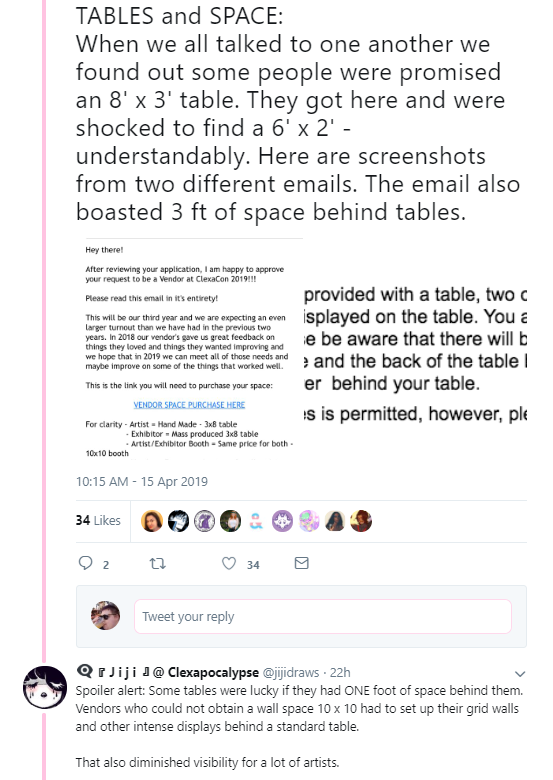 Given the lack of promotional activities, and that this is a travel show for many attendees, the show hours were extremely long for people staffing their tables alone. The long hours also have the effect of reducing any sense of urgency or excitement to go into the vendor creator hall, since there were close to 30 hours of access over the weekend. Finally, the long hours and constant programming created erratic periods of low foot traffic in the hall when attendees are in panels, and also preclude us from being able to fully participate in or even get a good taste of the con we thought we were meant to be part of.

Beyond the lack of baseline promotion, there was no attempt to drive activity to the hall. On Sunday we saw attendees who had not previously made their way down into the basement and into the hall, which seems to have been prompted by posts on Twitter made by the vendor coordinator on her personal account. I don’t know what transpired behind the scenes, but that does suggest that the con was still choosing not to be supportive of its vendor creators, and that the frontline staff member felt that using her personal account was her only option for doing so. 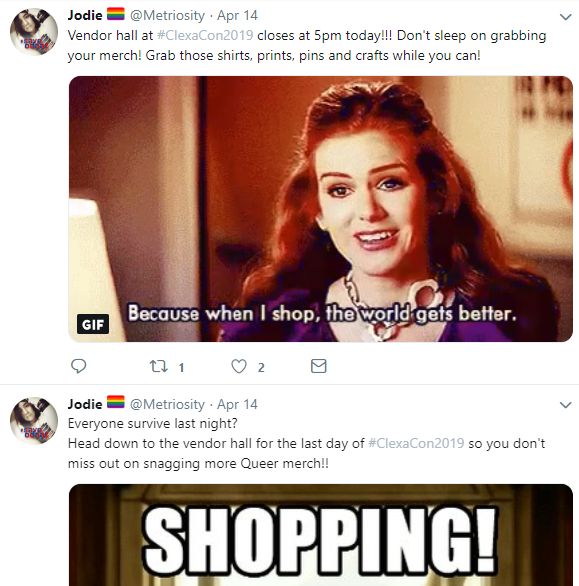 Advertising for the vendor hall was so nonexistent that it’s worth noting that the atmosphere, and perception of the vendor hall being a disaster was tangible enough that both attendees and sponsors made comments to vendors. 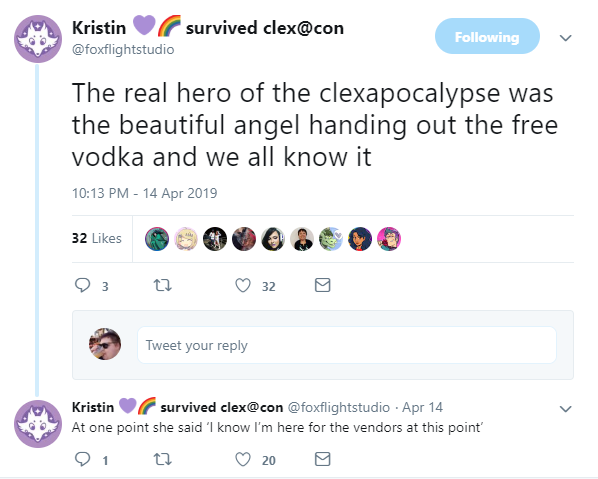 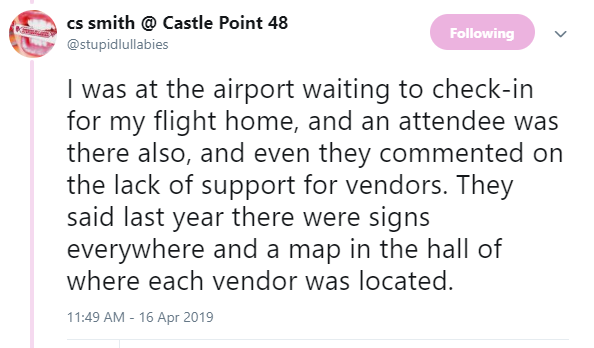 Lastly, we’ll be wrapping this up with some legitimate financial concerns.

As previously pointed out, the hall was breaking down early, and tables were becoming vacant. Some vendors asked to spread out to a second table, or take on a solo table if they were sharing, in order to make the hall appear less vacant. We were told we could. For a fee. Meanwhile, no one noticed those artists who didn’t ask and instead simply sprawled to take over the additional neighboring spaces.

The tables were already sold. ClexaCon had already made their money off the table. But in order for artists to try to make the best of a bad situation, you demanded even more money from us. Not to mention evidence of inconsistent table pricing with no discernable reason as to why. 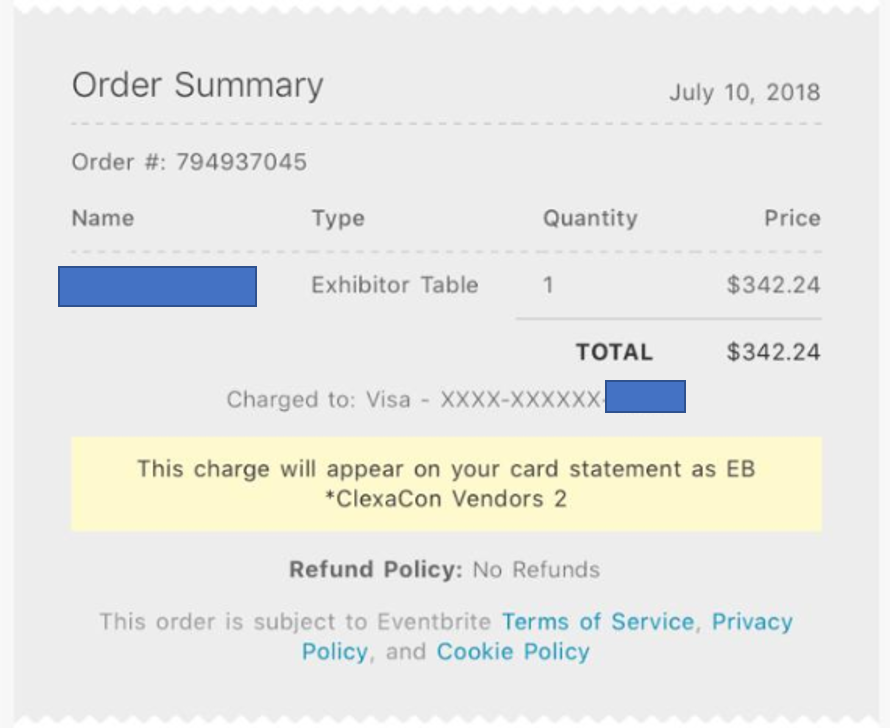 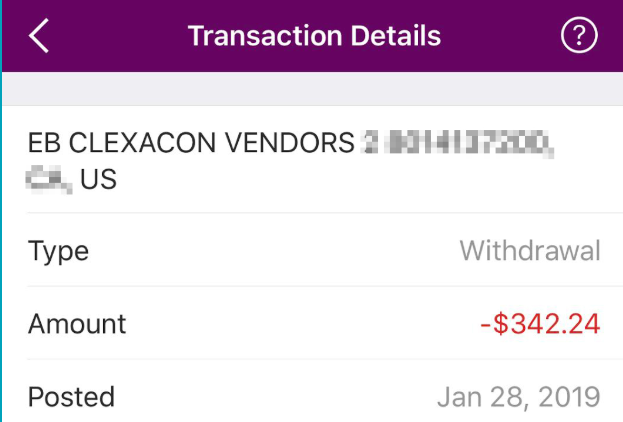 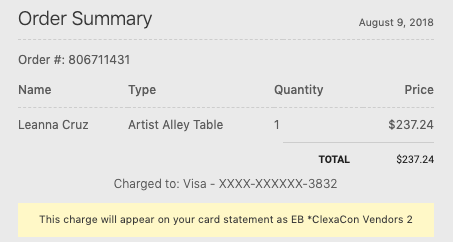 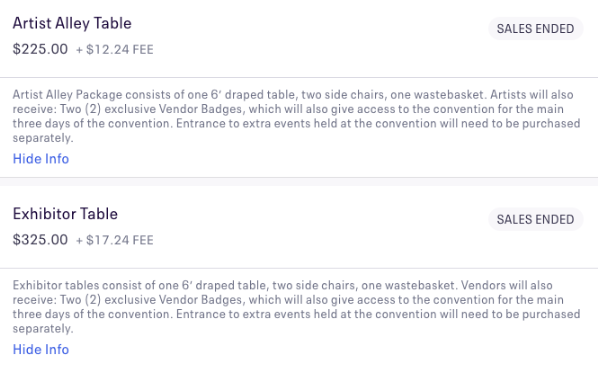 You required vendors to report sales to you and pay sales tax before leaving the con. However, we were never informed to whom the money should go. We were told that we could only pay in cash or money order (as opposed to writing a check to the state of Nevada), and no receipt was offered or given when cash was turned in. Although there was a spot on the form where vendors could write down their Social Security Number and other personal information, some vendors did not fill out that information. When they brought it up to the staff/volunteer members who were accepting the money, the vendors were told that the information was not necessary, despite being asked for that information on the official tax form. When a vendor refused to pay without some form of receipt for their taxes, they were told the form serves as a receipt (it doesn’t, it serves as a notice of what the taxes are) and were offered a handwritten receipt which didn’t even include the date.

I am writing this as a vendor who exhibited with ClexaCon in 2018. I saw what this convention once was. It was well attended, well maintained, well organized, and profitable. It’s become public knowledge that an original founder of the convention was removed from management, and remaining staff members were stripped of any power they might have had to right the situation. This is evidenced through to the layout, which seems random rather than planned to either disperse or collect similar creators in areas on the floor.

The impression I am left with is that it seems to have been something of an afterthought and additional revenue generator for the main convention, rather than an integral and integrated part of the programming. This sentiment can be seen in the complete absence of vendor badges. VIP attendees, staff, and high paying attendees, all possessed badges labeling themselves as such. Vendors were given a 3-Day ClexaCon pass and a vendor ribbon which looks very similar to ribbons attendees collected throughout the convention – which voids any actual vendor visibility. Even the security and some staff had to look twice to determine if a vendor was actually labeled as such.

This letter was written and publicly shared as a good faith attempt to point out your missteps and provide feedback as to how the convention can be improved. Queer spaces, especially those for creators, are so, so, essential. Our community is starved and desperate for these spaces. Because of this desperation, it’s very easy to appear hyper critical of under performing shows. This is why we’ve provided concrete examples of easily avoidable mistakes.

Here are some steps we hope you’ll take to better the current situation and improve future ClexaCon events.

We hope you take these notes into consideration.

Written by Jenn Arledge of Arledge Comics on behalf of, and cosigned by, the undersigned.