Filmmaker Nicole Conn will be premiering her new feature film, More Beautiful for Having Been Broken, at Frameline 2019 on June 30th. Many may remember her from her previous work, Elena Undone and A Perfect Ending, both of which were crucial in the realm of lesbian media. This new work is focused on her own life and was inspired by her son Nicholas. More Beautiful for Having Been Broken is a piece that speaks to beauty that can come out of the broken. I spoke with her about this movie and her previous work in her interview and appreciate her candor in answering my questions.

Would you tell our readers a little about yourself?

I’ve been a filmmaker since 1991 when I made my first feature, “Claire of the Moon” – I moved to LA to forge my career and in the meantime ended up getting married and having two extraordinary children. My youngest son, Nicholas was born 100 days early at 1 pound. I ended up making a documentary, “little man” that won 12 Best Doc Awards. Because Nicholas is medically fragile, I wasn’t sure if I would continue filmmaking but when I partnered in my second marriage to Marina Rice Bader, we ended up creating Soul Kiss Films and I made “Elena Undone” and “A Perfect Ending” with Marina producing. With “More Beautiful for Having Been Broken” I’m debuting my 9th film.

Could you discuss your feature, More Beautiful for Having Been Broken?

This film project has been the absolute most challenging I’ve ever encountered. Not just because it is so personal to me, but because of a variety of problems with funders, producing partners, scheduling issues, Nicholas’s health, the tragedies in my family (lost my father, oldest sister and kid brother within 20 months of each other). But through it all, one thing was very clear to me. I had to make this film!

It’s a love letter to both my children, based so much on our lives, events, and dialogue we’ve shared. I had always wanted to put a character with special needs into my films but producers just weren’t into it they felt that having such a character was a “downer” and that “people don’t want to see it.” I know how much people don’t want to see it because I’ve been in places where my son simply becomes invisible. Everyone’s always talking about “inclusion” – but this is one community that has not been included. In many cases in studio features those with special needs are played by very competent and skilled actors who don’t have special needs. I became more and more committed. I want people to see my son through Cale Ferrin (who has special needs and plays “Freddie”) – as the extraordinary child that he is. And like Cale Ferrin, Nicholas is full of love and laughter and all good things. He lives completely in the moment and has the sweetest nature you can imagine. Why would we want that invisible?

What led you to create this film?

In 2013 my son became very ill and had to endure one hospitalization after another. I was a mess and became an even bigger mess when my sister passed in a violent suicide in 2014. I had started a film based on characters from a book Simon Schuster had published in 1996 called “Passion’s Shadow.” That became “Nesting Doll” which I tried to make on and off until 2017. Having been completely broken by my sister’s death and Nicholas almost passing twice in 2015, I finally got some help and through the love from my mother, son and daughter, Gabrielle (who makes her debut in the film) out of the ashes sprang sheer beauty in the most surprising places. In the little moments. And in the great loves. My “Silver Tribe” a group of women from around the world are my very dearest friends and they held me up during the shoot and have had my back every single day since! And my inner circle: Lissa Forehan (Producer), Chakinta Jones (EP), Jayne Goldstein (EP) and Fontessa De Ridder have helped me become the strongest I’ve ever been and the film that began as “Nesting Doll” evolved into “More Beautiful for Having Been Broken.” 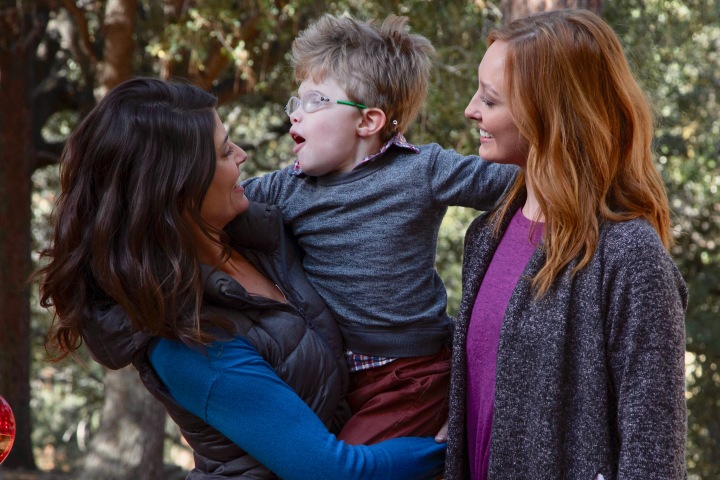 Was it challenging working on such an emotionally focused work?

Yes. Absolutely. And last year Nicholas ended up back in the hospital for 10 days so extremely ill and no one could figure out what was wrong with him. It was in the middle of my first rough cut and I remember sitting in the hospital staring at my unconscious son thinking – what the hell are you doing, Nicole? Nothing matters next to a loved one being so sick. It made me question everything. But Nicholas finally came home and while he was bed-ridden the next couple of months, I saw the film we had shot and that I was editing and realized I loved it. Plain and simply just loved its message and its beauty. And I really wanted Cale to experience his first big role, because like Nicholas his condition comes with medical fragility and any number of things that can become fatal before their time.

I read that inclusion is very important to you and your work, how did this impact the film?

Casting the role of Freddie was the most critical aspect of this film.  I would not cast anyone who did not have special needs. When we first read Cale in 2015 he was only 8. The minute he came into the room he owned it. His energy was palpably loving. When I picked him up at the end and hugged him, I felt like I was hugging God. No joke. And from that point on, I feel like Cale and I and his incredible mom, Britteny have been on a mission to make this film and get it out there – even through all the bumps along the way.

Could you share a bit about the festival More Beautiful for Having Been Broken is screening at?

Yes, Frameline International Film Festival is the largest and longest-running LGBTQ+ film festival in the world, with more than 60,000 attendees annually, making it one of the largest film festivals of any kind in the United States. As a filmmaker it’s impossible to beat screening at Frameline to give your film a really good start. We’re thrilled to be holding our World Premiere for the film at my single favorite theatre ever — the Castro Theatre.  An historic treasure, it was built in 1922 and has over 1,400. The theater’s ceiling is the last known leatherette ceiling in the United States and possibly the world. It’s magical!

What do you hope viewers take away from seeing the film?

That no matter how broken you’ve become, or how broken something may seem, that if you allow yourself to really feel it all and move through it at whatever pace you need, that you will be blessed by one treasure after another. Out of that brokenness comes beauty. And I for one feel like today more than ever we are all starving for beauty. And romance. I’m so proud to have this film be filled with both.

You are also well known for your work connected to lesbian cinema, could you discuss Claire of the Moon and Elena Undone?

Well, “Claire of the Moon” has been the gift that keeps on giving. Even after all these years I’m constantly hearing from people who say they came out to the film, that it’s their favorite film, etc. etc. Its Cult status makes me a little squeamish. The film is my least sophisticated work and the filmmaking as a first-time effort is a bit clunky. But where it works – it really works – exploring one woman’s journey to her sexual identity. But the thing I’m the very proudest of is that film was the first lesbian feature to have ancillary product – “MOMENTS-The Making of Claire of the Moon” is the best-selling doc of its kind (https://www.reelhouse.org/nicoleconn/moments-the-making-of-claire-of-the-moo)

I produced a soundtrack, T-shirts, artwork, sculptings – even Xmas ornaments one year. It had been the first film since “Desert Hearts” 7 years earlier that really spoke to our community.

Elena Undone took me by surprise. Perhaps because it was based on my relationship with Marina Rice Bader – and was totally authentic – maybe that’s why it has such a rabid and avid following. I believe Traci DinWiddie and Necar Zadegan are absolutely breathtaking in this film. Their chemistry and talent is off the charts. And, we happen to hold the Longest Kiss in Cinema History record in this film.

Did you anticipate the impact these movies would have?

Not even remotely! Seriously!! But if I had to guess why – I would say it’s because I have a very distinct style and people know what they will get from me. My stock in trade is romance – all the nuance of romance and shades of romance and not in a cheesy Harlequin novel manner, but how real women feel the first time they fall in love, or what happens when a straight woman discovers she has fallen in love with another woman, or as in “More Beautiful for Having Been Broken” a “slow burn” romance when an over-burdened single mother finds solace from another woman. And how that woman falls in love with her son – and she sees him light up like he never has before. Those are emotions people want to feel. Over and over again. And for me all the thousands of fans who have written to tell me they watch my films over and over and OVER again – I believe it’s because as I said earlier we are all starving for that kind of yumminess in our lives.

Are there any additional projects you’d like to discuss?

I have two projects in development right now. One is a lesbian thriller and the other is a project that’s pretty damn heavy – but it’s calling out louder and louder to my soul every day and it is based on the experiences I had when my sister passed.

Where can our readers find updates about you and your work online?

Ohhh happy to give you my social media sites: