Masterminds starring Patrick Stewart and Vincent Kartheiser was released in theaters on August 22, 1997.

The article contains spoilers.  If you haven’t seen the movie “Masterminds,” please do not continue reading. 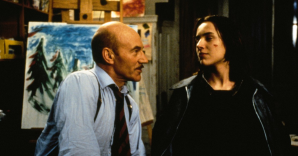 Patrick Stewart is Rafe Bentley, the head of security at Shady Glen, a private school catering to the children of the very wealthy. Vincent Kartheiser is Oswald “Ozzie” Paxton, a teen computer wiz prone to getting into trouble. As the film begins, we see Ozzie attempting an illegal download of a video game not due to be released for a few days. After he’s caught by his dad Jake (Matt Craven), father and son “negotiate” a punishment: Ozzie is to take his stepsister Melissa (Katie Stuart) to school as stepmother Helen (Annabelle Gurwitch) doesn’t have time in her schedule. We learn that Jake doesn’t seem to have much time for Ozzie as well as the man is in the middle of a big business deal at work. Helen thinks Ozzie is acting out from lack of attention.

Melissa attends Shady Glen. Ozzie tries to exit the school before he is seen by the principal. But Claire Maloney (Brenda Fricker) catches him leaving. Ozzie is a former student of Shady Glen but is in exile, banned for life because of a science room burnout prank.  In fact the little troublemaker Ozzie is the reason for the new security system currently being installed by Bentley. But Maloney doesn’t know that Bentley’s not entirely on the level. Installing the security system is only a front for a larger nefarious reason. Bentley plans to hold the richest kids hostage until their parents (heads of large companies) pay the hefty ransom he demands.

Ozzie wants to pull off one last prank at Shady Glen. However teenage mischief must take a back seat when the hostage drama begins. Fortunately for the children, Ozzie being at the school helps prevent Bentley’s scheme from harming the kids. The police are basically useless. Paxton saves the day with his wits, computer savvy and knowledge of the school layout. It’s amusing to see a teenager being one step ahead in order to outsmart the criminals. Ozzie is cocky and doesn’t seem to have a fear for his safety. Even though Shady Glen is over run with men with guns, we see Paxton crawling through air vents, sabotaging the villains’ computer system, setting off sprinklers and rigging a pool bomb. He wants to rescue the kids, in particular Melissa who as the film progresses he starts to see as his sister and not a stepsister.

The plot of Masterminds isn’t original as there are similar movies featuring its premise. When watching the film, there’s little doubt that Bentley will actually hurt the children or that Ozzie won’t be able to rescue them. The movie is not about the danger of a hostage situation, but about how two masterminds (Ozzie and Bentley) are able to outsmart each other. Bentley is impressed with Ozzie, who he considers to be a worthy opponent. He even offers the teen a job if Paxton ever graduates high school.

Stewart is best known to audiences for his role as Captain Jean-Luc Picard in Star Trek: The Next Generation. He has a commanding presence that lets you know he’s in charge. Bentley is a gentleman criminal; he’s all about the payoff and will get it by any means necessary. The idea that his carefully executed scheme was foiled by a juvenile delinquent is surprising to him.

Kartheiser plays the part of the rebellious teen taking on authority figures well (He later went on to star in the television series Angel as the petulant Connor).

Masterminds is considered a failure by Box Office standards. But if you are a fan of Patrick Stewart and Vincent Kartheiser, you may want to check it out.

5 thoughts on “Blast From The Past: Masterminds 8/22/97 via @stacyamiller85 @SirPatStew #VincentKartheiser”