I had the chance to chat with Gretchen Wylder, the creator, writer, and one of the core characters of the web series These Thems. Her series uses humor to examine and discuss topics of queerness, gender identity, coming out, sexual empowerment, and so much more. In her series, Wylder plays Gretchen, who after realizing she might be a lesbian, befriends a nonbinary dog walker named Vero. This friendship leads to a journey through the queer culture and world that Gretchen had never known. Thank you to Gretchen Wylder for discussing her series with me.

Sure! I’m Gretchen Wylder. I’m a Pisces sun / Leo rising / Capricorn moon. I moved to LA eight months ago. I was a theatre actor in New York for the past nine years, I went to school and performed in Chicago 6 years before that, and I was born and raised in St. Louis. I have a fat cat named Mr. Pickles.

Your web series These Thems examines a very underrepresented population, would you describe the series and your role in it?

These Thems is an ensemble-based queer comedy focusing on the lives of a newly out lesbian making up for lost time, a nonbinary educator intent on “training the straights,” a trans man who is comfortably in the closet, and a cis gay man looking for love. I like to say it’s Broad City meets The L Word meets Insecure. I am the creator and writer of the show. I also play the character of Gretchen, who is newly out at the age of 30 and trying to navigate the queer dating scene in New York City.

What inspired this series?

The queer community in NYC is so incredible and diverse and many of my friends, exes, and dating partners identify as nonbinary, trans, or genderqueer. I wanted to see someone like me, a cis woman who presents as feminine and tends to date masc-of-center folks, having a rom-com experience. And if you are reading these terms and saying “whaaaat,” then I made this show for you too. I like to think the show is equal parts educational, endearing, and hilarious. I made it so that queer audiences will identify with the characters on screen and for the straight audience members to be able to identify with and learn from them as well.

Could you describe how you hired for this project and the environment both in front of and behind the camera?

Hiring the core team was quite an experience. I have a theatre background and so really didn’t know anyone in the filmmaking world. I reached out to my queer community for recommendations on directors and producers. It was really important to me that the team behind-the-scenes reflected the dynamic and intersectional cast that is featured in front of the camera. Even though the ratio of out, LGBTQ+ filmmakers is tiny compared to cis white men in the industry, it was extremely important to me to keep both casting and hiring crew as authentically queer as possible. And as a result, the dynamic on set was just incredible. Every day felt like a little bit of queer heaven on earth. Our amazing director, Jett Garrison, lends his personal life experience as a transmasculine man to the direction of the show. And our producer, Sophia Clark, brought on this incredible dream team of a crew, again with a wide range of intersectional and queer experiences. In front of the camera was the extra dreamy part — my other three lead actors are all so talented and fun to be around. Honestly, it was a set full of love and you can really feel that energy when watching the show.

What do you hope viewers take away from These Thems?

I hope viewers leave entertained and filled with love for these characters, fueled with a better understanding of queer culture and queer identities.

As this is a comedy, how do you hope using this genre will share your message?

I love comedy. I think comedy is the greatest educational tool that we have. If we can approach something with humor, it becomes much easier to digest and learn about. So it was important to me to tackle the topics of gender and sexual identity in this way. I wanted to create something that was accessible to both straight and queer audiences, to give people a universal experience that they can begin a dialogue with. The initial goal for this project was to spread as much good as possible, to as many people as possible, so a web series just felt like the right way to accomplish those goals. And with Hollywood still being a bit slow on the uptake, I realized that if I was going to make this happen, I’d have to do it myself. The final goal of course is to get the show picked up and delivered to the mainstream masses in a bigger way. But by creating an indie web series, I was still able to retain creative control and bring on an entirely LGBTQ+ and intersectional crew and creative team, which was also very important to me. To make sure that the work was created by the community it was made to serve. 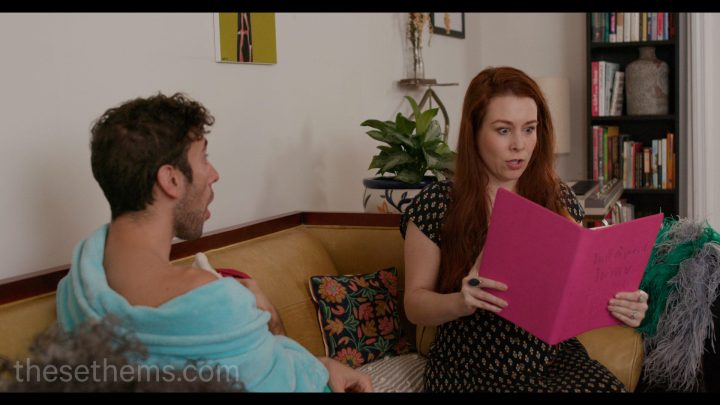 I’m working on a pilot for a completely different concept at the moment, but primarily my focus is on getting These Thems into the world and solidifying Season 2.

Where can our readers see and keep up with These Thems and you online?