I had the chance to chat with Scott J. Ramsey about his upcoming film X, which will be screening at Another Hole in the Head film festival. This is the filmmaker’s directorial debut and is presented at a queer film. Thank you to Scott J. Ramsey for answering all of my questions.

I’m Scott – I’m a filmmaker and musician; I grew up in the San Francisco Bay Area and now I live in LA. Two of my collaborators and I launched an artist collective called The Foundation, whose mission is to make inclusive, subversive art that tells stories on multiple levels: feature films, music, and music videos. The goal for each project is to create an immersive story world with multiple media.

Your feature, X, will be premiering at Another Hole In the Head Film Fest, could you describe the film?

Our movie is about masquerade charity balls that double as sex parties, hosted by a young woman named Christian King, the chair of a mysterious foundation. Little do the guests of these events know Christian’s secret: that she has a hidden camera in the guest bathroom. It’s a feminist/queer spin on the tragedy of the Hitchcockian voyeur with a raw indie edge, set at the coolest party you’ve ever been to on the most beautiful cliff in the world.

What inspired this project?

After we graduated film school, I was living with my close friends, Hannah Jost and Kevin De Nicolo. We wanted to make a long form project together – and over the Summer this vivid story came to me about this character who was a voyeur – a pervert – who believed she was a monster. I didn’t want to wait to make a feature film, because this story felt so vivid and full to me, so I brought the project to Hannah, and we wrote a script together, then she and I brought it to Kevin and asked him to be producer. The three of us then pitched to Kevin’s parents, who had invested in other film projects, and to our immense gratitude, agreed to invest in us and believed in it. So we set out to make our movie – with zero experience, zero contacts – just this generous investment and a team of rookies drawing from an oasis of passion – neither of which are any small thing! I’m a dreamer and an optimist at heart so I knew we would finish it even though everyone was telling us we couldn’t.

You were involved in a multiple elements of X, could you share the many hats you wore?

This may sound unhealthy, but it’s difficult for me to separate the movie from myself, because all of the elements that didn’t come from me came from people around me that I love, so it really feels like an extension of us and our team, rather than just a project I worked on. I directed the movie, my creative partner Hannah and I wrote the script together, I edited the movie, I produced it as part of our team of producers. Additionally, I’m the vocalist and songwriter for a music duo called The Major Arcana I formed with Kevin, who was also one of the film’s composers – and several of our songs feature in “X”. We’ve tried to create an immersive story world, that involves storytelling on 3 different levels: the movie, the music we made, and music videos we shot to 3 of the songs, which can be seen on our website and at youtube.com/XeverybodylovesX.

X is described as a queer film, would you be able to speak to how both the story on the screen and the elements behind the screen contributed to this identification?

The lead characters in “X” are queer characters, and the filmmaking team who made the movie is almost entirely queer, including myself. Over half of the cast and crew were women and/or queer people. Part of our aim in the story was making a movie with a distinctly queer gaze. Christian’s voyeurism is a weaponized female gaze unleashed on the guests of all genders who attend her balls. Cisgender male voyeurs, particularly straight ones, have been portrayed as dangerous and manipulative, yet also tragic and pathetic – so telling a story of a queer woman who is a monster, and knows she is, but also is driven by her shame about her secret felt like new territory. As a queer kid growing up, your desires are portrayed as perverted, so in a disturbing way it was easy for me to relate to someone who feels like a monster. I was always an outcast – a freak of sorts, well before I leaned into my queer identity even – so Christian’s promise of a place where you are free to be a freak also felt incredibly relevant and exciting. 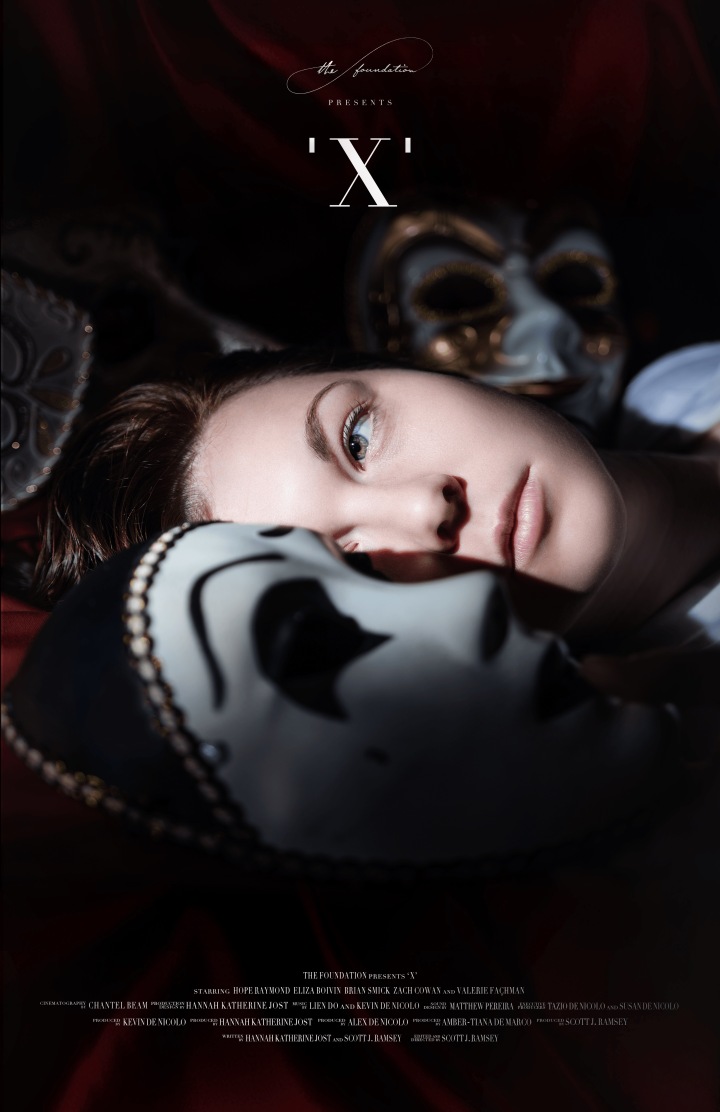 What do you hope viewers take away from the film?

Following this premiere, will there be other places that people can watch X?

Our movie will be available to stream online very soon – our Instagram @everybodylovesX and our website everybodylovesX.com and will make announcements about future screenings and streaming. Keep your eyes open!

Hannah and I have written a script for another feature film I’m going to direct, which we’re aiming to launch in 2020. Meanwhile, Kevin and my music duo I mentioned, The Major Arcana, has finished an album which we’ll also be putting out next year, which has music both from “X” and new songs.

Where can our readers keep up with you and X online?

They can follow “X” and me on instagram at @everybodylovesX and @scottjramsey respectively. Also everybodylovesX.com, and my website scottjramsey.com, both of which will have up-to-date info about how to see the movie!