For fans of the long running ABC daytime drama, the wait is almost over. Next Monday, General Hospital returns with all new episodes.

The last new episode aired in May 21, 2020. The final scene of the episode showed Nina (Cynthia Watros) taking the witness stand at the Nelle vs. Michael hearing for custody of Wiley. What will Nina have to say about Nelle in her testimony? We’ll find out soon. 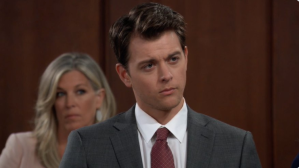 In the meantime, here’s the promo for July’s last week of repeat episodes:

"You could drop a house on Nelle." #GH pic.twitter.com/rUIQcmoASf