The finale of Houdini and Doyle was last night and it was so full of amazing moments that it was hard to narrow down just what I wanted to talk about this week. There was an entire town killed under mysterious circumstances, visions of Houdini’s mother, and Adelaide’s continuing investigation into her husband’s affairs. I finally decided that I would focus on two interesting events that tied in with two things I love.

Now if you’re reading this I am assuming that you are caught up on the series Houdini and Doyle so there will be some slightly spoilery moments in this article if you aren’t. After the death of his mother, Harry has been seeing a young woman wherever he goes. He insists that he is being stalked, but Doyle thinks that his grief might be causing him to see things. This leads to a discussion of dreams and the differences between dreams and reality. Harry decides that in order to determine which is real and which is a dream that he will make a handy card to check his senses. He does some research and learns that you can’t read in your dreams. Harry makes a card that says, “If you can read this, you are not dreaming.” During the episode he is out for a walk and suddenly confronts the woman who has been following him. This mystery woman turns into his mother and as he’s freaking out he checks his card and notices that he can’t read it. A similar moment happens to Adelaide after her husband arrives in her room. 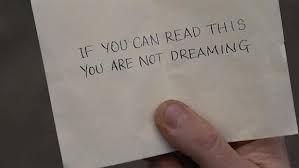 Now what made this moment in the episode so interesting for me was that Batman in Batman: The Animated Series had a similar moment. In the episode Perchance to Dream, the Mad Hatter manages to catch and put Batman into a controlled sleep. As he sleeps Batman dreams of an alternate life in which his parents never died and he stayed Bruce Wayne. Even though this dream life is wonderful, he keeps thinking that something is wrong. As it progresses Batman finally resorts to going through his father’s library to see if he can read the books. When he can’t he realizes he must be dreaming and fights himself back to the real world. Everything I’ve checked, in my brief attempts at dream research, has said that you can’t form the images of letters correctly in your sleeping mind. I can say that I had a dream once where I knew what the papers in front of me said, but when I woke up I distinctly remember thinking that the letters didn’t actually spell what I read. I thought I’d share the Batman scene with you in case you wanted to compare it to what happened in Houdini and Doyle.

Now the second portion of the episode that I wanted to discuss is probably something a bit morbid to have gotten excited about. I am a huge fan of the musical Assassins by Stephen Sondheim and after Houdini has a meeting with Walt about his mother, he is told that she wants him to say hello to the president. The President of the United States in 1901 is William McKinley, who is attending the Pan-American Exposition in Buffalo. Our crime solving trio has been studying the cipher of the anarchists that Adelaide’s husband was connected with and they think that there might be something happening. They rush to the convention and wind up running into a number of anarchists, resulting in one death, but not McKinley’s. While they might have saved him, McKinley will sadly be shot by Leon Czolgosz on September 6th and will succumb to his wounds less than a week later. The only reason I was so excited that this moment was mentioned in the episode was that The Ballad of Czolgosz in Assassins is ridiculously catchy. That entire musical is a great way to learn about American history, though they are some of the more morbid parts. Here’s the song for you, sung by the wonderfully talented Neil Patrick Harris.

I have one more quick Houdini and Doyle moment that made me really happy. When Doyle is met by Sherlock Holmes in his mind, the fictional detective tells him that he needs to start writing about him again. While on the boat ride home, Doyle meets a man with a name badge that reads Baskerville. The Hound of the Baskervilles is my favorite Sherlock Holmes story and I really hope that the show will return for a second season so that I can see that story come to life.

Share your Houdini and Doyle thoughts with us in the comments or on Twitter, @thenerdygirlexp. You can find me on Twitter, @kleffnotes, on my blog, kleffnotes.wordpress.com, on my kleffnotes YouTube channel, I run The Nerdy Girl Express Snapchat, thenerdygirlexp, and I post recipes on the iZombie Support Group site.

One thought on “@HoudiniandDoyle Bedtime Reading and Assassins from @kleffnotes”