Now if you aren’t watching Inhuman Condition on KindaTV not only are you missing out on a spectacular web series, but you also probably think I can’t spell. Yes, that title says zombae and not zombie for very necessary reasons. Inhuman Condition is a web series that exists in an alternate reality where inhumans, supernatural beings, live in the world alongside humans. Yesterday evening the series revealed that the blog of one of the main characters is online for people to check out.

The zombie character, Clara, whose nickname within the fandom is zombae, has an old blog that reveals details about the world of Inhuman Condition that wouldn’t be able to come up organically within the series. She introduces herself and the stages of her condition. Zombies go through four stages of the Living Dead Disease, the last of which is Hunger. Besides her own condition Clara describes werewolves, vampires, haunters, and cubi. Finally I realized that cubi are incubi/succubi. I should have realized that much sooner, but apparently my brain just was not picking up on it. There are also mentions of inhuman related laws and regulations within this alternate reality. 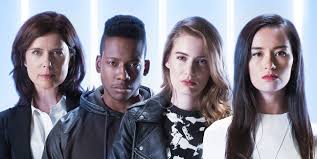 The element that I found tremendously interesting was the rewriting of movies and television to show a difference between the real world and this imagined universe. Clara discusses World War Z, which in this version stars Idris Elba as a gay male protagonist and was directed a woman, who also happens to be a lesbian. Clara’s blog also recreates Grey’s Anatomy by adding inhuman story lines. This includes making certain characters lycans and discussing lycan rights. Even though these episodes were’t real they genuinely read like something that I could imagine happening in the series and I would have definitely watched them on repeat. The blog also invents a Netflix series that focuses on people dealing with being diagnosed as zombies. Netflix really should check out this story because it sounds like something that would do very well, like a supernatural Red Band Society.

You can read all of Clara’s blog, Angry Dead Girl, on WordPress. Now R.J. Lackie, the creator of Inhuman Condition, did say that some of the definitions and terms are a bit out of date so while you read please keep that in mind. The blog is wonderful to read and even if you aren’t watching Inhuman Condition yet, this acts as a great way to ease yourself into the web series.

Share your thoughts in the comments or on Twitter, @thenerdygirlexp. You can find me on Twitter, @kleffnotes, on my blog, kleffnotes.wordpress.com, on my kleffnotes YouTube channel, I run The Nerdy Girl Express Snapchat, thenerdygirlexp, and I post recipes on the iZombie Support Group site.