The Megazoic series continues with tremendous force and a switch in some of the elements of the series. While still focusing on dinosaurs who have vast technological powers, but this time a villain has come to try and tear the world apart. Zulgaran has plagued the dinosaurs of the world for eighty million years and many centuries ago he found a way to rebirth species from his ancient era and found a way to integrate them secretly into society. This will be the focus of the final two books in the series with Kortan trying to find a way to take action against this terrible force.

In The Hunted Ones, Kortan learns he is an Elderkind species known as Sinraptor, which means he is now a target. Zulgaran has created robotic assassins called Enforcers who are targeting those like Kortan. When this is realized the government chooses to relocate them into protective custody, but Kortan will not let this happen. When he learns that an energy wave to kill all of the Elderkind he escapes relocation and presses on to find a way to win the fight, even though he has been declared a fugitive and is being hunted by the Laurasia Corps. This is a battle for survival that will change the world that Kortan lives in.

When we transition to the final book in this series Megazoic: An Era’s End we learn that Kortan has created a special force field that allows the dinosaurs to live safely, but Zulgaran is not as removed from the story as we had thought. He had been banished, but is finding his way back to Earth to become the last dinosaur on earth. This will be the dramatic end to the series with a massive battle between good and evil bringing everything to a head. 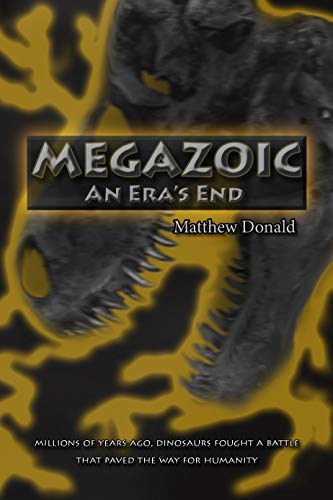 Matthew Donald has done an exceptional job of creating a very detailed and fantastic world where dinosaurs rule. He has taken varied elements of science fiction and blended them together in a way that works in a way that is surprising. Kortan moves the story along in a way that shows the evolution of a society against powerful outside forces. If you enjoy big battles, evil villains, and the power of technology against darkness this is a fun series to delve into. If can find all of Megazoic on Amazon.