This article contains spoilers so if you haven’t seen the episode “Ladies Drink Free” please do not continue reading.

Supernatural returns from a two week hiatus with the Winchesters including a novice on a hunt, British Men of Letters member Mick Davies (Adam Fergus) and running into a familiar face, Claire Novak (Kathryn Newton), as they investigate a  werewolf case.

Werewolves are one of the staples used in the supernatural mythology, with mixed results in the success and failure rate for the Winchesters. The Season 2 episode “Heart” saw Madison, one of the first women to capture Sam’s heart (forgive the pun) after Jessica. Sadly, Sam was forced to shoot her when efforts to cure her lycanthropy affliction proved futile. College student Kate (Brit Sheridan) was turned into a werewolf in the Season 8 episode “Bitten” and resurfaced in the Season 10 episode “Paper Moon.” Because Kate dined on animal hearts and ended up saving the boys from her werewolf sister Tosha, the Winchesters didn’t kill Kate. Currently, her whereabouts are unknown. Most recently, Dean successfully battled a “werepire” (a werewolf/vampire hybrid) in the Season 11 episode “Baby.”

Werewolves come in all varieties, as we learned in the Season 9 episode “Sharp Teeth.” One of the hunting community’s own, Garth Fitzgerald IV (D.J. Qualls), was bitten. The affable Garth became a werewolf.  We haven’t heard from him in a few years. Hopefully, he hasn’t acquired a taste for human hearts or succumbed to a silver bullet.

Tonight’s episode offered some interesting wrinkles with Mick joining in on the hunt and Claire getting turned.

The episode opens with two siblings. One is killed in a werewolf attack while the other is left seriously injured.

At the British Men of Letters compound, Dean grows impatient as he and Sam wait for Mick. When Mick arrives, he updates the boys on the werewolf case. In addition, Mick tells the Winchesters he studied lycantrophy and trained at Kendrick’s , apparently a posh Hogwarts type institution the BMOL sends its operatives. Harry Potter aficionado Sam is clearly impressed. But it takes more than academic credentials to impress Dean. Still, Mick admits that the BMOL are more thinkers than fighters. His solution is hands on training; Mick wants to tag along with the brothers on the hunt. To say that Dean is less than thrilled by this prospect would be an understatement. However, there is one perk to having Mick hunt with them; Sam and Dean get to stay at a three star hotel stocked with all the candy that Dean can grab and a swimming pool. This is definitely not the seedy motels of yesteryear that the Winchesters were used to. 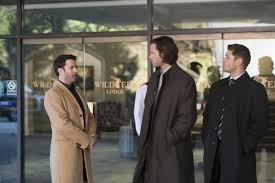 When the Winchesters go to the hospital to see Hayden, the victim, the boys quickly learn that Mick’s strategy for acquiring information isn’t to don the usual uncover persona as an FBI agent. Rather, he sports the white coat of a doctor. While Winchesters wait outside with Hayden’s distraught mother, Mick notices Hayden’s wounds then subsequently, he lies to the brothers that she is going to be okay. Later, Mick goes back to the hospital and kills Hayden with silver nitrate injection (not before he is attacked and injured by her).

Along the way, the boys cross paths with Claire, also in pursuit of the werewolf. Ms. Novak meets Mick who she calls their “lame foreign exchange student.”

Adam Fergus portrays Mick as a man wrestling with his duty to the BMOL and his sympathy for Hayden (and later Claire). If the writers are offering a serving of foreshadowing, I suspect that Mick’s unquestioned alliance to the BMOL will be tested and he may eventually become fully entrenched with Team Winchester.

This episode continues to show Claire as a committed hunter. She has adapted to the hunting lifestyle, but her anger and stubbornness doesn’t hide her love for surrogate family. Her first thought after she is turned is for Dean or Mick to kill her because she can’t risk the possibility of hurting Jodi and Alex.

The scenes where Claire tries to fight turning into a werewolf and then when she is injected with the BMOL lycanthropy cure are chilling. I actually thought that Claire would become the latest hunter casualty, but she pulls through to hunt another day.

As a sidebar, I do wonder, though, whether Garth,if he is still alive somewhere out there, will be killed by Mr. Ketch now that  the Winchesters revealed to Mick that Garth is also a werewolf.

I enjoyed this episode. Although I would have liked more scenes of Sam and Dean working together on the case, I thought the writers integrated both Mick and Claire quite well within the framework of the episode. Adam Fergus and Kathryn Newton were stellar in their guest performances.

How many hunters does it take to work a werewolf case? If you answered four, then you tuned into the latest episode of Supernatural titled “Ladies Drink Free.”  Sam and Dean (Jared Padalecki and Jensen Ackles) were joined by Mick Davies (Adam Fergus) of the British Men of Letters and wayward daughter Claire Novak (Kathryn L. Newton).  Mick stated that he wanted to be ready for whatever came next so field experience via a tag along with the Winchesters was definitely in order. In Mick’s case, it seems that the Men of Letters aren’t just glorified librarians with their noses buried in their books. But how does the Brit handle being on an actual case? For starters, checking into the three star Wild Elk Lodge.  This makes sense to me: If you’re going to risk your life and possibly die while on the job, you might as well live it up with room service, chocolates and a pool (And if you’re Dean, you take a swim…even if you didn’t bring a bathing suit with you!) Having an extra hunter does come in handy, you can pretend to be FBI Agents while he impersonates a doctor to check to see whether the attacked girl was bitten by a werewolf.

Mick Davies really got to develop as a character when he showed regret over having to kill werewolf victim Hayden.  Whereas Mr. Ketch is like “Let’s eradicate all monsters” seeing only black and white i.e. monsters are bad, Davies began to question the shades of gray when Claire Novak was bitten. How could he end the life of a young girl who became a tragic victim of circumstance? He couldn’t.  It’s a good thing that the British Men of Letters (BMOL) were working on a blood therapy cure for lycanthropy.  I don’t know about you, but the BMOL are pretty useful; they’re giving Sam and Dean information and resources that he old school hunters never had.

Despite Jody Mills wanting to give her a normal life, once Claire Novak became bitten (bad choice of words as this literally happens to her before the episode’s end) by the hunting bug, she was committed to the life. She even lies to Jody about where she is while hunting. When Claire is bitten by a werewolf, Dean tells her that she can live with the curse but her life will be different. Claire knows her own temperament; and being a werewolf would make it worse. She doesn’t want to hurt Alex or Jody and urges Sam and Dean to kill her.

There are tense moments in the episode as Claire turns into a werewolf and has a painful time as the cure takes effect. For a brief second, it looks like Claire had succumbed to her affliction. But the cure works; proving again that working with the British Men of Letters can be useful. I always enjoy seeing Claire’s return to Supernatural.  I want to see her grow and develop as a hunter and still haven’t given up hope for a Wayward Daughters spin-off with Alex, Claire and Jody. I wonder where other viewers stand on this.

Guest stars Adam Fergus and Kathryn Newton were excellent in the emotionally charged and action packed script by Meredith Glynn. The guest stars and recurring actors in Season 12 are really adding to the story of Supernatural. Just as Sam and Dean have grown, so has the series with the addition of characters to help the Winchester on their journey. Supernatural may be Sam and Dean’s story but the writers are clever enough to realize that the Winchesters don’t have to go at it alone.