This article contains spoilers so if you haven’t seen the episode “Twigs & Twine & Tasha Banes” please do not continue reading.

In the episode “Twigs & Twine & Tasha Banes,” we saw the return of Asa Fox’s children Max and Alicia Banes (Kendrick Sampson and Kara Royster), the witch/hunter twins who enlisted the Winchesters’ help in their search for their missing mother. This episode was directed by Supernatural alum Richard Speight, Jr. who last directed “Stuck in the Middle (With You),” the Quentin Tarantino inspired script written by Davy Perez.

Sam and Dean Winchester (Jared Padalecki and Jensen Ackles) must come to terms with Castiel’s (Misha Collins) betrayal and new role as the protector of Lucifer’s baby. Sam tells his brother that they need to think like Castiel if they have any shot at finding him. Dean, however, says that when he looked at Castiel, he didn’t recognize the face staring back at him. But could there be hope on the horizon, a small victory of sorts? Sam has the pieces of the broken Colt. Can he fix it?

Max and Alicia call one of Mary’s phones, but instead reach the boys.  Alicia tells the brothers that their mother was hunting a “borrower witch” (i.e. a witch that gets its power from demons) but they haven’t heard from her in a week. Max thinks Alicia is overreacting. While Dean believes the priority is locating Castiel, he and Sam go to help the Banes’.

Watching Max and Alicia interactions with Sam and Dean was interesting. Max’s witch powers are strong while Alicia tells Sam that her abilities are latent, more like “noise in the background.”  Later when the Banes (with the brothers in tow) arrive at the hotel where Tasha was staying, they are greeted by their mother. Of course, viewers know that this woman isn’t Tasha because we saw her impaled in the opening teaser.

Meanwhile, Ketch is torturing a shape shifter sporting Mary’s skin for intel while Mary watches on. Later, Mary tells Ketch that she has never seen this side of him. Yet, for Ketch, a conscience is a liability that runs counter to the British Men of Letters (BMOL) way of doing things where the ends always justify the means.
Mary and Ketch are performing a mental waltz of sorts. Trust is in short supply.

This episode was a perfect balance of emotion and action. Mary is increasingly suspicious of Ketch. Her investigation of him reveals the BMOL’s plan to eradicate the American hunters. She confronts him and Ketch confesses his evil doings. What follows is a fight between the two; the physical altercation is brutal with Mary holding her own against the Brit until he incapacitated her with a taser. Both David Haydn-Jones and Samantha Smith rise to the challenge of these intense scenes.

Sam and Dean do their own investigation when they see a man they thought was missing coming from the cellar. The cellar is ripe with the smell of bodies as the boys find several heartless corpses, including Tasha. It isn’t long before Max appears in the cellar and is shocked to see his mother’s body. 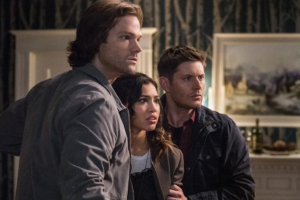 We learn that the borrower witch killed Tasha. This witch sought to save her soul from Hell by having her powers transferred to Tasha. In addition, the witch used a spell to create life-like dolls of her victims. These dolls have the hearts and memories of their victims. The witch proposes a deal to Max: if he agrees to assume her powers, she will make sure that he, Alicia and “Twig Tasha” live happily ever after together as a family.

But if there’s one hard lesson Dean has learned over the years is that deals (whether they are consummated with a demon or some other entity), never turn out well. So while Max is considering the unsavory offer, Dean shoots the witch. 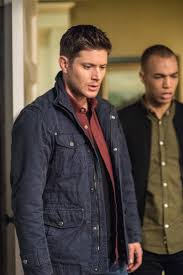 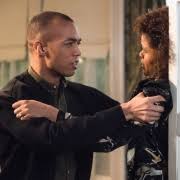 What Max doesn’t know at this point is that “Twig Tasha” has killed Alicia. But Max doesn’t heed Dean’s warning about making a deal. Rather, he uses the witch’s spell to create “Twig Alicia” and presumably has taken over the witch’s powers.

Guest stars Kendrick Sampson, Kara Royster and Alvinia August gave stellar performances. I was impressed how August interpreted “Twig Tasha” so well that she was a physical replicant of Tasha but her unreal qualities were evident. Royster portrayed Alicia as the more trusting of the siblings which perfectly complemented Sampson’s take charge, will-sacrifice-anything- for-the-love-of-his-family-persona as Max. Although I’m saddened by Alicia’s death, the writers left the door wide open for “Twig Alicia” and “evil witch” Max’s return.

The ending scene with Mary bound by Mr. Ketch most likely awaiting torture (mirrored the earlier scene with the shape shifter Mary).  Lady Toni Bevel is back to “interrogate” (torture) Mary. But Dean and Mary were playing phone tag throughout the episode and Dean knows from listening to Mary’s voicemail that she needs their help. Will Sam and Dean be able to save their mother?

Supernatural’s latest episode “Twigs & Twine & Tasha Banes” saw the return of Asa Fox’s twins, Max and Alicia Banes (Kendrick Sampson and Kara Royster) as we got to see how far one sibling would go not to lose the other.  This time, Sam and Dean weren’t the brothers considering making a deal.  That fell to Max.

In addition to the Banes case, we saw Mary and Mr. Ketch (Samantha Smith and David Haydn-Jones) continuing their hunting partnership by interrogating a shape shifter. Mrs. Winchester saw a side of Ketch that she didn’t like: He seemed to take pleasure in inflicting torture.  I think this made her feel uneasy and set her suspicions on high alert, particularly as far as Mick’s (Adam Fergus) absence was concerned. Mary finds Mick’s dead body and a room with a display of photos and intel on hunters including herself, Sam, Dean, Claire, Eileen and Garth and hears the recording of Dean telling Sam that he doesn’t trust Ketch. She confronts Ketch.  At first he makes a ridiculous story about a werewolf killing Mick (“By shooting him in the head?”- Mary “It could happen”-Ketch). Realizing that the jig is up, Ketch lets his true feelings for the American hunters out. He’s had to clean up her sons’ incompetent messes, like killing the government agents when Sam and Dean were arrested and that psychic girl (Magda) who her boys didn’t view as a monster. Then, we got a knocked down, dragged out fight between the two.  And let me just say, Mary kicked ass by kicking Ketch’s ass! She is a terrific fighter and held her own against the British Man of Letters. But of course, Mr. Ketch cheated and used a taser to subdue her.

Some viewers were angry with Mary for what they saw as a betrayal of Sam and Dean when she chose to work with the British Men of Letters. There were speculations as to her motives. Although I was surprised that she could work with the people who tortured her son, I believed her when she told Sam and Dean that she wanted to ensure that they had a future free of monsters. And at the time, Mary felt that the BMOL could accomplish this by ridding the world of the things that go bump in the night.  She had blinders on and was misguided, but I feel her actions didn’t diminish her love for Sam and Dean. And the fight scene with Ketch showed that; Mary was fighting for not only herself, but her boys.

Family love and loyalty is a strong theme on Supernatural. The choices and sacrifices the characters have made for each other are the foundation of the series. Max and Alicia Banes’ family history may not be as rich as the Winchesters, but their love and commitment to one another is as strong. When the twins’ witch mother Tasha (Alvina August) doesn’t contact them as she normally does when she is on a hunt, (Loved the “their mother’s on a hunting trip and they haven’t heard from her in a few days” line. Nice throwback to the Pilot. Kudos to writer Steve Yockey for including this) Alicia calls one of Mary’s phones, but gets Sam instead.  I guess it’s an unspoken hunter’s rule to answer a family member’s phone when it rings, which makes sense as lives could be at stake pending an response to a voicemail message. Alicia’s brother Max isn’t so keen on her contacting the Winchesters as he doesn’t believe it’s a big deal. Of course, the siblings and Sam and Dean find Tasha alive and well (not really as viewers witnessed her being impaled in the teaser).  We learn that Tasha and others fell victim to a borrower witch, who killed them then transferred their memories into homemade twig and twine dolls then used a spell to change the appearance into the person, who would be loyalt to her every command. Her motive? She needed someone to assume her power and save her from a stint in Hell when she died.  Max was willing to make the ultimate sacrifice to have his family together forever. In his mind he knew twig doll wasn’t his mother, but in his heart he couldn’t bear the thought of losing her. Both Sam and Dean have been down this doomed path. Dean encouraged Max not to accept the offer.  But when Alicia is killed, having just loss  his mother, Max refused to lose his twin too so he did the unthinkable and transferred Alicia’s memories into a twig doll. If we see Max again, I’m sure the character will face repercussions for his actions.

As the episode closed, Mary was at the mercy of Mr. Ketch and it appeared that he would be torturing her. By wait, look who’s back- Lady Toni, who loves using mind games as a means of torture. Her “let’s get started” comment as she pulled out a pad of paper had me thinking psycho analysis by a psycho. What is Mary in for?

“Twig & Twine & Tasha Banes” was a well written episode by Steve Yockey. We saw that looks can be deceiving i.e. shape shifters and twig and twine dolls and the price of sacrifice.  We also got a Ketch confession of his sins and an awesome fight scene for Mary. I enjoyed that it contained the supernatural elements of witches, spells, shape shifters and deals. And of course, stellar performances and directing by Richard Speight, Jr.