This article contains spoilers so if you haven’t seen the episode “The Future” please do not continue reading.

As Supernatural marches towards its Season 12 finale in a few weeks, what will the future hold for Sam and Dean Winchester (Jared Padalecki and Jensen Ackles) when disaster seems imminent with the impending birth of Satan’s spawn?

The April 27th episode, “The Future”, saw the return of Castiel (Misha Collins) from his lengthy stay in Heaven.This episode also marked the Supernatural directorial debut of Amanda Tapping. Tapping, as viewers know, portrayed the angelic “bureaucrat” (in Crowley’s words) Naomi in Season 8. While Naomi was angered by the King of Hell’s bureaucratic label, she certainly wasted no time in taking up stewardship as a leader in Heaven and in ensuring that the angels rescued Castiel (Misha Collins) from Purgatory. As the latest director on the veteran show, Tapping was tasked with directing a plot that saw Castiel betraying the brothers for what he believed was a greater purpose.

As the episode opens, Kelly Kline (Courtney Ford) is still being held captive by Dagon (Ali Ahn). Believing Dagon’s prediction that the baby will bring destruction to the world, Kelly feels that suicide is her only solution. She cuts her wrists. Yet, despite a bathtub full of blood, Lucifer’s son doesn’t allow his mother to die. Kelly reasons that this means her son is inherently good. 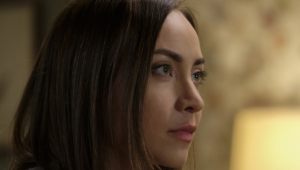 Meanwhile at the bunker, we see a number of camera angles with Sam diligently researching. When Dean enters the room, Sam tells his brother that from the information he has gathered, he believes that Kelly’s baby will be born on May 18th (Season 12 finale night). That doesn’t give them much time to locate Kelly or to figure out what they will do once they find her. While the brothers are talking, they are surprised by Castiel’s return from Heaven. Sam seems willing to forgive their angelic friend, but Dean is angry that Castiel disappeared for weeks without a word, especially when they had Dagon and could have used Castiel’s help. However, Dean later reluctantly includes Castiel in Team Free Will. Of course, the goodwill proves temporary for Castiel goes AWOL again, this time taking The Colt with him.

Castiel has been a tortured being for years now and his choice to betray the boys (by stealing the Colt with the intention of killing Kelly Kline and Dagon) places the character on precarious footing. Is it naive of him to believe that he can make things right when so many of his decisions have produced a domino effect of disaster? I don’t like that the writers have Castiel often failing as an angel (and sadly as a friend) despite his good intentions. Further, I’m confused as to why he is so powerless most of the time. Playing devil’s advocate, even if his angel battery is nearly tapped out, shouldn’t he at least be better with the hand-to-hand combat?

I am glad, though, that the writers are showing Sam’s intellectual prowess. It was Sam who figured out if they use the angel grace extraction spell, Kelly’s baby would become human. It’s a risky proposition, but I like that Sam offered a better option than Castiel’s plan of taking Kelly to Heaven where both she and the baby would be destroyed.

Speaking of destroyed, I was disappointed that the Colt was destroyed by Dagon (we only recently got it back!) and also that Dagon killed Joshua (sporting a new meat suit from the one we remember from the Season 5 episode “Dark Side of the Moon”). Personally, I think that the end of The Colt eliminates future story potential. It was interesting, though, that Kelly’s baby’s power appeared to have been transferred to Castiel. Castiel is now on board with the notion that perhaps the birth of Lucifer’s spawn will be a good thing. So, is Castiel stepping in loco parentis? If so, I don’t imagine that Castiel as a surrogate daddy will sit well with Lucifer, the real baby daddy.

Supernatural episode “The Future” was directed by Amanda Tapping. This was an appropriate directorial choice full of irony. Tapping played large and in charge Heaven boss angel Naomi in Season 8. She controlled Castiel to do Heaven’s/her bidding by digging into his mind. Now as a director to Collins, Amanda Tapping was able to tap (no pun intended) into Castiel’s emotions as the angel continued on the path of doing what he felt was right by finding Kelly Kline (Courtney Ford) and stopping the birth of Lucifer’s (Mark Pellegrino) baby.  Castiel is the epitome of the tortured angel as everything he attempts to do for the greater good always seems to turn out wrong.  If the road to Hell is paved with good intentions, the road to Heaven is covered with Castiel’s mistakes.  Still despite failing after failing, Castiel refuses to give up. The theme of the episode was protecting the future (hence the title).  Castiel sought to protect the world from unspeakable evil, otherwise known as the devil’s spawn.

After Dagon’s (Ali Ahn) revealed to her that she wouldn’t survive the Nephilim’s birth and that her baby would bring about humanity’s destruction, Kelly was torn.  Since she discovered that she was pregnant, Ms. Kline loved her son and vowed to keep him safe. But how could she bring a baby into the world that would mean its destruction (not to mention the end of her own life)? Kelly attempted to kill herself by slitting her wrists. But Lucifer Jr. wouldn’t let her die; her baby saved her life (and its own).  This made Kelly believe that her baby was good and would be their world’s savior. I’m on the fence about this.  The biggest question for me is although the baby is half the devil’s, it’s also half human which to me means that it has part of a human soul. Does this also mean that it has goodness inside of it as well? Castiel has stated that a Nephilim is evil, but couldn’t this be a debated case and not so black and white?

This brings us to Sam and Dean (Jared Padalecki and Jensen Ackles). Castiel questioned Dean about whether he could kill an innocent.  I don’t think Sam and Dean could kill a baby (even Lucifer’s child).  Remember when Castiel wanted them to kill Jesse (Gaitlin Griffith), the Anti Christ back in the Season 5 episode “I Believe the Children Are Our Future?” To which Sam responded “We’re the good guys, we don’t kill children.” Sam proposed another solution based on a theory he had. When he had been possessed by Gadreel back in Season 9, Castiel performed a grace extracting procedure. The younger Winchester brother believed that if they could do the same with Kelly’s baby, they could save both mother and child as a graceless baby would be just a baby. I love how Sam is always using his brain.

Lucifer is mind bullying Dagon and gives her a brain lashing when she allows Castiel to escape with Kelly. “Find my son” is his order to the Prince of Hell on fear of infinite torture (ouch, that doesn’t sound good). Dagon gives torture of her own to angel Kelvin (Nathan Mitchell) to find Castiel. In the big showdown, Dagon destroys The Colt (NO!!!) But in a surprising twist, Kelly’s baby works its power through Castiel, who is then able to kill Dagon.  This convinces Castiel that the baby is good after all and deserves to be born. I don’t know about this…did the baby’s “goodness” save Castiel, Sam and Dean?  Or was it evil’s trick to convince the good guys that it could be trusted?  An interesting question.

As the episode closes, Castiel uses his sleep touch on Sam and Dean so he can leave with Kelly.

“The Future” was written by Robert Behrens and Meredith Glynn. As the season is drawing to a close, what will we see in the saga of The Winchesters, Castiel and Lucifer’s baby?  Stay tuned.