One of the 2020 Daytime Emmy nominations Rapunzel’s Tangled Adventure received was for Outstanding Main Title For An Animated Program.

In my opinion, the main title should create a feeling of anticipation for the story.

Fast forward fifty years later, I discovered a new animated series on Disney Plus that earned a spot in my favorite animated series Hall of Fame: Rapunzel’s Tangled Adventure (formerly Tangled: The Series).

I can go on giving accolades to Rapunzel’s Tangled Adventure as everything about it is topnotch. But when talking about something, it’s always good to start at the beginning. And the beginning of every episode is the main title. 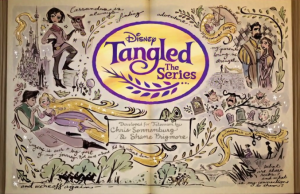 Rapunzel’s Tangled Adventure is Rapunzel’s journey towards discovering the world and becoming the queen she’s meant to be. We see her face triumphs and defeats along the way. Rapunzel’s mother Queen Arianna believes only her daughter can decide the kind of queen she wants to become. And to discover that, Rapunzel needs to go out into the world. Queen Arianna gives her daughter a journal with the inscription Plus est en vous, which means there’s more in you. This is a true testament and describes Rapunzel to a tee. She’s more than a girl with seventy feet of magical hair. Rapunzel is a person with drive and determination. It’s easy to see what a strong ruler she’ll be.

The journal is a place for Rapunzel to keep a record of her travels. And because she paints, Rapunzel uses her journal as an artistic exploration of her adventures often eager to fill its pages.

The main title sequence for Rapunzel’s Tangled Adventure shows the journal as well as various scenes from the season’s episodes accompanied by the theme song “Wind In My Hair” sung by Mandy Moore who voices Rapunzel.

Chris Sonnenburg, Bryan Deemer, Jezreel Carlos and Claire Keane created the main title. I think the choice to use the journal as the focal point of the main title was an excellent decision. Viewers are given the impression of being a part of Princess Rapunzel’s thoughts and feelings, giving them a bird’s eye glimpse into her world. I can’t imagine a more appropriate main title for Rapunzel’s Tangled Adventure.