CBS’ The Inspectors episode titled “Cat in a Coal Mine,” focused on the dealing of synthetic opioid to unsuspecting college students.

Farmingdale Apartments, Washington, DC.  Mitch (Terry Serpico) and Amanda (Jessica Lundy) are on a stake out. With other members of their team, the postal inspectors burst through the door. They search the apartment and Amanda asks an inspector to search the bedroom. “Nice place for a college dealer,” Amanda comments. “Well the opioid business is booming,” adds Mitch.  In the bedroom, the inspector picks up some envelopes that contain a strange powdery substance. When some of it gets on his hands, he falls to the floor. “Officer down, send an ambulance,” Amanda speaks on her com link radioing for help.

At Jamestown University, Veronica (Erica Marie Sanchez) has her nose buried in a textbook. She has a big Chemistry test coming up. “I have no chemistry with Chemistry,” Veronica tells Noah (Harrison Knight) and Preston (Bret Green), “But with Lou’s help, I’m starting to get it. Molecule by molecule.” “The big test is in a few days right?”Noah asks. “Yes, and if I don’t get at least a ‘B’ I’m in trouble,” Veronica answers. “Don’t worry, you’ve got this,” Preston assures then quizzes Veronica asking her a question about hard water and she gets the correct answer.  But Veronica says that she doesn’t have enough hours in the day to study and needs to get at least a ‘B’ to get a ‘C’ in the class.

Meanwhile at US Postal Inspection Service, Mitch tells Amanda that the landlord can’t identify their suspect because he never met him because it was a short term vacation rental done online paid for with a fake ID. It seems that the only people that see these drug dealers face-to-face are their customers. And they can change their base of operation with the click of a mouse. Mitch decides to pull the profile pictures from all the rental sites that were used to see if by chance he used his own picture. “I want to ID this guy before anyone else gets hurt,” Amanda tells Mitch.

At her study session with Lou (Alan Pontes), Veronica gets a question incorrect and says that “This Chemistry stuff is too right brain for me. I was on my way to the honor roll and then the Periodic Tablet came along.” Veronica comments that she never tried so hard to get a ‘C’ in a class and adds that Chemistry is not a skill set that news anchors actually need.

Back on the case, Mitch displays the profile pictures for the apartment rentals and tells Amanda, Georgia (Charmin Lee) and Preston that it looks like their suspect used different profile pictures on all the sites he searched. Preston learns about the officer that was injured by just touching the substance identified as synthetic opioid and how dangerous it is to come in contact with. Later, Georgia is able to provide crucial information to help with the case. 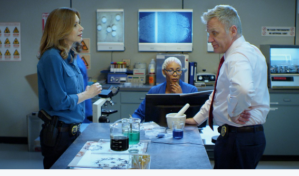 As Veronica continues to cram for her Chemistry test and guzzle large quantities of coffee, Lou offers her an alternative and gives her some pills that will help her stay awake and give her a boost. Veronica turns down the suggestion to take pills; she’d rather fail the test then go down that path. Bravo V!

Preston finds that a student has mistakenly overdosed from the pills and contacts Amanda. Later when he sees Veronica and she shows him the pills Lou tried to give her, Preston tells them about the officer that had to be taken to the hospital for briefly touching the dangerous substance. This gets Lou to cooperate with the postal inspectors and provide any information he knows. 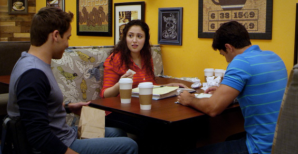 Georgia shares with Amanda the Thank You note Preston gave her (Georgia).  She tells Amanda that Preston is the best intern she ever had. Amanda is pleased by Georgia’s words and very proud of her son.

Veronica presents the synthetic opioid story on air and encourages students to seek better ways to study then resort to taking drugs.

CBS’ The Inspectors episode “Cat in a Coal Mine” showed the dangers of sythetic opioid.