As the episode opens, we see Preston sealing an envelope addressed to 21 Monkeys c/o Rock Solid Talent Agency. Then, he heads outside and drops his letter in the mailbox. By someone is sitting in a car watching and as soon as Preston leaves, this person uses a crowbar to break-in the collection box, stealing the mail including Preston’s letter. 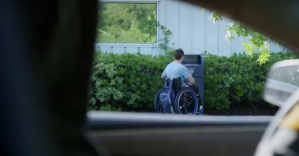 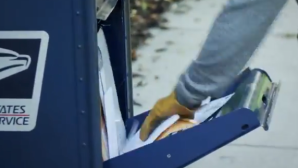 Meanwhile, Amanda meets Inspector Eric Lin from the Philadelphia office. Eric and Amanda head to the forensic lab, and Amanda introduces Georgia (Charmin Lee) to Inspector Lin. Mitch (Terry Serpico) is on team leader training so Eric is assisting in the case which involves collection box break-ins. Georgia shows Eric and Amanda the dents on the mailbox which appears to have been made be a crowbar. Meanwhile, Amanda gets a tip about a man being spotted at the location of the mailbox break-ins. Eric and Amanda head to Alta Vista, MD where they find Tony Belder (Alex Livinalli). And what is in the passenger seat of Belder’s car? A crowbar. The postal inspectors bring Tony Belder in for questioning.  Amanda tells him that witnesses can place him at the scene of the collection box break-ins. Belder insists that he is an upstanding citizen. His rap sheet tells a different story says Inspector Lin. Belder smiles and calls his prior arrests ‘misunderstandings.’ This infuriates Inspector Lin but as the postal inspectors can’t hold Tony Belder unless the crowbar found in his car matches the dents on the mailbox, he’s free to go. But Amanda tells him that they’ll (the postal inspectors) will talk with him again. In the hallway, Amanda gives Inspector Lin some sound advice: “You play the suspect, don’t let the suspect play you.”

Unaware of the mailbox break-in and with the date fast approaching for The Henry Wainwright Foundation benefit, Preston and Veronica (Erica Sanchez) wonder why the management agency for 21 Monkeys hasn’t replied to Preston’s request for the band to play the benefit. Noah (Harrison Knight) arrives and shows his friends a flyer. It seems that 21 Monkeys is playing a show in West Virginia. And since Preston doesn’t want to not have a headliner for the inaugural benefit for The Henry Wainwright Foundation or lose his deposit for the venue, it looks like a road trip is in order to ask 21 Monkeys is person whether they’ll play at the benefit. 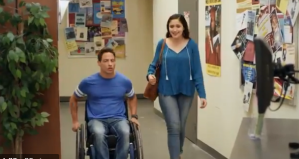 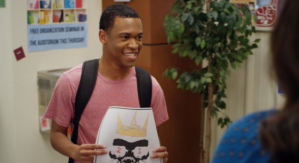 However when Preston tells his mother about the road trip, Amanda immediately worries. She asks Preston why he didn’t discuss it with her prior to making the decision.  Preston reminds that he is in college and doesn’t need parental permission.  Amanda says that it’s just that this is the first time he’ll be traveling so far from home since his accident. Preston assures that he’ll be okay and promises to bring Amanda back a 21 Monkeys t-shirt.

But once on the road, Noah has been driving for longer that his mobile app indicated. What good is a short cut if it takes longer than the normal route? And to make matters worse, Noah’s car breaks down!  The trio are able to make it to Dave’s Garage in Summerville, West Virginia. While Noah is trying to get a soda from the vending machine, several guys come out of the garage restroom. Preston and Veronica recognize one of them as Nate Irvin (James Hal Hardy), lead singer for 21 Monkeys. What are the odds of 21 Monkeys not only using the same app as Noah, but their tour van breaking down and they being at the same garage as Noah, Preston and Veronica?  This gives Preston the chance to ask the band if 21 Monkey will play The Henry Wainwright Foundation benefit. Preston gives Nate Irvin a flyer and explains that the proceeds from The Henry Wainwright Foundation benefit go to texting while driving awareness. Nate is interested, but needs to ask his agent first. After Preston tells him it’s crucial he gets an answer now, Nate Irvin says 21 Monkeys will play the benefit. And as 21 Monkeys van is fixed but the garage needs a part which they won’t be able to get until the next day so the gang will miss the show, Nate gives Noah, Preston and Veronica a preview right there at Dave’s Garage. 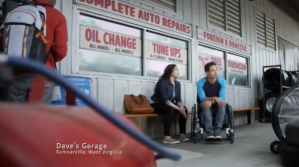 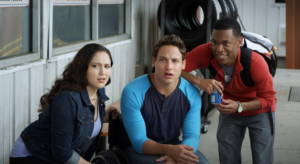 Back on the case, Georgia is able to make a positive identification of Tony Belder’s crowbar as the tool (Shirley Marc, Firearms and Toolmark Examiner, Sr. has a cameo in the episode) used to tamper with the collection boxes. Inspector Eric Lin shows Tony Belder the evidence and sarcastically says “Great news, we cleared up that little misunderstanding.” It looks like Tony Belder is heading to prison!

The episode ends with Preston returning home and telling Amanda that he wasn’t able to get her a t-shirt, but he did bring her back a souvenir: A button from Dave’s Garage.

CBS’ The Inspectors episode “The Henry Wainwright Foundation” showed the use of tool mark examination in helping to identify weapons used in postal crimes.