CBS The Inspectors episode titled “The Initiation” focused on the crime of mailbox vandalism and touched on the subject of discrimation.

The episode opens with a college guy named Mike Rogers in the passenger seat of a car driving down the road in a residential area. Mike is recording a video as he takes a baseball bat to the mailboxes he passes when one of them explodes. Mitch (Terry Serpico) and Amanda (Jessica Lundy) are watching Mike’s video as mailbox vandalism is a federal crime that postal inspectors don’t take lightly.

Meanwhile, Preston (Bret Green), Veronica (Erica Sanchez) and Noah arrive at Fitness & Frolics where Preston is considering a membership.  He thinks working out in a group setting is a great motivator. “It’s hard staying focused when you’re alone,” Preston says. Veronica suggests that Noah join too and then Preston could have a workout buddy. Later, Preston is using the equipment to build his upper body strength.  He shows good reflexes when a guy named Carter (Evan Henderson) tosses him a basketball and Preston catches it. Carter is impressed and suggests that Preston join his team sometime for a basketball game. That is, until Preston comes from behind the workout equipment and reveals he’s in a wheelchair.  Carter rescinds his offer and adds that he’s looking for real athletes.  Preston is stunned. 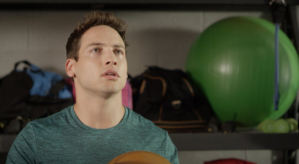 Still thinking about Carter’s comment, Preston has a dream in which he is tossing a basketball into the net but then falls down.  He is awaken by Veronica, who questions him about his dream.  Preston explains what happened at Fitness & Frolics. “I’m used to people looking at me differently,” Preston says and but the remark about not being a real athlete is what hurt the most. Noah doesn’t think Preston should let it get to him.  Noah tells Preston that he (Preston) is the most athletic person Noah’s knows. Noah picks up some of the sports trophies Wainwright has received over the years, including one for weight lifting. But that turns out to be a statute of Atlas that Veronica brought back from Italy for Preston; Noah obviously needs glasses. Both Noah and Veronica agree that Carter’s remark shouldn’t stop Preston from continuing to work out at Fitness & Frolics. Preston takes their advice and goes back to Fitness & Frolics. However, when he overhears another person being bullied by Carter and his crew, Preston can’t remain silent. Unfortunately, speaking up for someone causes Preston to get banded for life from Fitness & Frolics. Preston tells Noah (who got a pair of glasses), Veronica and his mother what happened at the gym. Although Amanda reminds that she nor his father ever condoned fighting or any sort of altercation, she’s proud of Preston for speaking up in defense of someone.

Meanwhile, Mitch and Amanda question Cyrus Hastings, the man whose flamingo mailbox (“It was the 70s”-Cyrus) exploded when Mike Rogers hit it with the baseball bat. As Cyrus is a property manager, the postal inspectors wonder whether a former tenant that was evicted could be the culprit. Hastings’ damaged mailbox is dusted for prints.  Lab results reveal Cyrus, his wife and the letter carrier’s prints.  But there’s also an identifiable set.

Next, Mitch and Amanda question Mike Rogers. He admits that taking a baseball bat to the mailboxes was a fraternity hazing prank. “If you were told to jump off a bridge, would you do it?” Amanda asks Mike, not believing how he could commit a crime under the guise of a prank. “‘Into water?” is Mike’s response as a way of a yes.  Cooperating with the authorities, Mike gives the names of all the fraternity pledges so they can be questioned.  However, one name is left off the list: Billy Shane Jr. (Brian Gilleece). Mitch and Amanda learn that Billy Shane Jr. is the pledge master and a big man on campus. Georgia (Charmin Lee) tells them that Billy Shane Jr. is also the son of William Shane, a once successful stockbroker who was indicted for embezzlement. And the prosecutor who tried the case is Mike Rogers’ father. The date of the mailbox explosion being the one year anniversary of the day William Shane was sentenced to prison makes this more of a coincidence; this is a revenge plot conceived by Billy Shane Jr.  So, Mitch and Amanda go to Jamestown University with a federal subpoena to take Billy in obtain his fingerprints.  Billy laughs this off.  He tells Mitch and Amanda that he has a 3.8 GPA (like that matters when you commit a crime!).  Not realizing the seriousness of the situation he’s in and not wanting them to “make a big deal about it”, Billy Shane Jr. confesses to the “prank” He is arrested and if his fingerprints are found on Cyrus Hasting’s mailbox as the person who planted the explosives inside, Billy will be looking at many years behind bars.

As the episode closes, Preston is surprised when his mom, Noah and Veronica have gifted him with workout equipment so he’ll have his own personal gym in the privacy of his home.

If you suspect a mailbox of being vandalized, report it to your local Postmaster.

CBS The Inspectors delivered another entertaining and informative episode.